If you have visited Wikipedia during the last few days you must have seen and hopefully read founder Jimmy Wales appeal for donations. Wikimedia, the parent non-profit that runs the free online encyclopedia Wikipedia as well as a number of sister sites, survives solely on donations. Towards the end of each year, the organization launches a fund raising campaign. The two-month campaign for 2010 has just kicked off, during which Wikimedia hopes to raise $16 million necessary in order to keep the sites free, stable, and running smoothly.

Wikimedia is carrying out A/B tests on different fund raising messages. It turns out that the banner of  Jimmy Wales haunted gaze staring at you is performing the best. The figures available on the banner testing page speaks for itself. 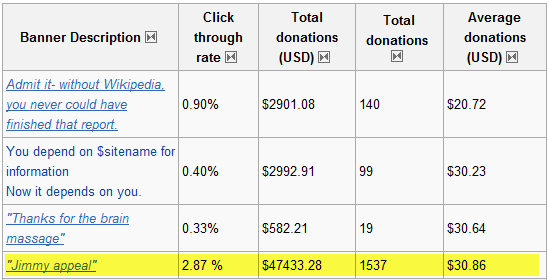 Almost 900 people were involved in the creation and discussion of potential banner messages. We tested dozens of iterations of banner designs, including both graphical and text, and we will continue to do so.

Many of the new banners did well. Unfortunately, none of them came anywhere near the 3% clickthrough rate of the winning banner from years past: “Please read: a personal appeal from Wikipedia founder Jimmy Wales.”

But we’re going to keep trying. Our research indicates that banner wins because it is simple and direct with no attempt at marketing or manipulation. So we’re going to test, “A personal appeal from Wikimedia editor _____” and later in this memo, I’m going to invite you to be that editor and write an appeal for us to use in the fundraiser.

Hundreds of banners were created and submitted by volunteers, which you can browse here. Some of them are clever, others not. Perhaps the most horrible is the one that says “Give generously, Jimmy needs a new Lambo.”