There is such an abundance of photos sharing sites on the Internet that any new player trying to enter the saturated market has to do something significant and interesting to get attention. Yogile is one that has managed to do just that. Apart from the extremely effortless procedure of creating web albums and sharing photos, Yogile has one major feature that makes it stand apart from the crowd, and that is collaboration.

Take a wedding, as an example. Dozens of attendees and friends take their own photos with their own camera, making every photo unique. You never get to see a majority of them. Sure you may ask them to share with you and they might send you their Facebook album link, but you never see them all at one place. With Yogile, you can create an album and ask others to contribute their photos to it. Only the user who initiates the photo gathering has to signup for the service, which takes less than 5 seconds since there is no annoying email verification process. Creating and naming an album takes another 10 seconds. Once an album has been created it will generate a unique email address in the form [email protected]. Anybody who wishes to contribute to this album has to simply email the pictures to this address. The lack of signup and laborious photo uploading procedure, in my opinion, will actually get more people willing to contribute. Conventional photo uploading – through the website – and some not so conventional uploading process, such as through MMS is also available.

Besides, collaboration is just an option. You can choose not to collaborate and use it to share only your own images. 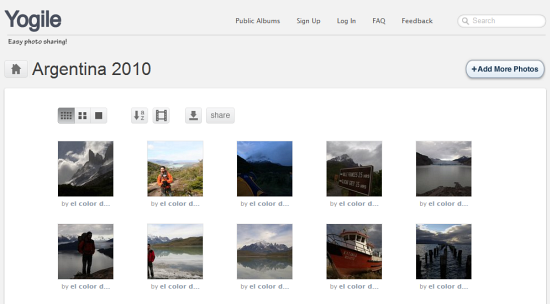 Managing albums is painless. As the album owner, you have full control over your albums – you can make them private or publically accessible. Albums which are public can be viewed by anybody. Private albums can be viewed only if the viewer knows the password which the owner had set when creating the album. You can rename album name, add description, right from the album page just like editing a live document.

As a viewer, you have several different layout options – thumbnails of three different sizes, sorting photos in an album by date, viewing in a slideshow or even download the entire album as an archive.

Yogile gives you 100MB of monthly upload. There is no space limitation – just upload limitation. As long as the total amount of data uploaded during a single month doesn’t exceed 100MB, you are all set. If that isn’t enough, there is a paid upgrade option for unlimited storage for $24.95 a year.

Going over Yogile’s various features I couldn’t help but compare it with Flickr. With Flickr every process is so long winded, so time consuming, so complex. By the time you signup for Flickr, a Yogile user will have signed up and created three albums. Flickr definitely does a lot more than what Yogile does, but Yogile has an one up on Flickr for doing it better. Keeping it simple is their unique selling point and I like it that way.