Social networking sites such as Twitter and Facebook are mighty useful for sharing links and stories with each other. During the explosive growth stage of Twitter several aggregator sites like Tweetmeme and Topsy, to name a few, sprang up allowing people to discover the latest news stories that are actively circulating on the micro-blogging network. These sites were a runaway success and soon Twitter established itself as the fastest outlet for breaking news.

As for Facebook, there aren’t many aggregator sites that collect links shared on this particular social network. ItsTrending is probably the first that tried this. The site was established during the early quarter of this year, possibly in April. The fact that ItsTrending itself has only 656 shares on Facebook, at the time of this writing, indicates that the site hasn’t been able to generate buzz the way Tweetmeme had. 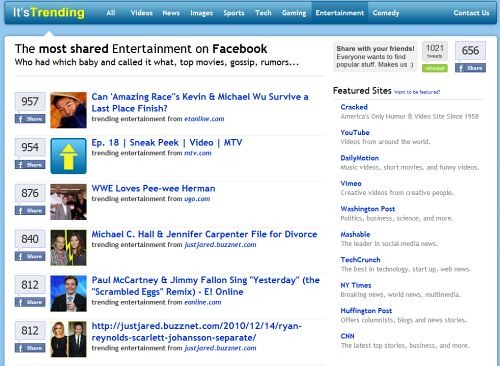 Facediggs is another aggregator that presents the most popular links shared on Facebook by its users. Shared links are organized into different sections and links can be sorted by most recent, most shared and by trending. All Things Now is the most recent aggregator that lets you discover viral links on Facebook. Unlike ItsTrending or Facediggs, All Things Now has more wider categorization – topics such as Shopping, Cooking, Education, Politics and Finance are seen among others. You can view the most shared stories for today, the last week or all time – which can go back in time for as long as was the site was in existence, which isn’t very long, incidentally. 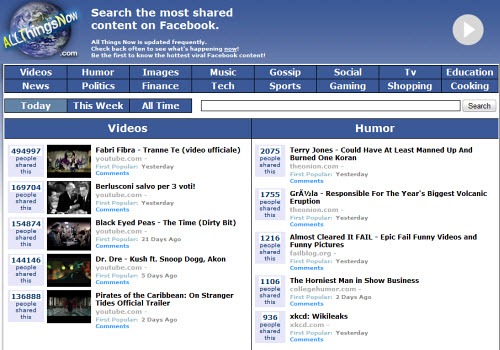 Curiously, though all three sites purports to bring the “most shared” links on Facebook none of the sites appear to present identical content at any given time, which leads me to conclude that the stories and links you find on these three aggregators are not technically the most shared links on Facebook. But popular nonetheless.

Related: Find out which articles on your blog was most retweeted