Finally an FTP program that doesn’t make me want to throw up. Cyberduck, the popular FTP client for Mac, has just released a Windows version that has exactly the same set of features as found on its Mac counterpart. As the first beta of Cyberduck, a software with dashing looks and terrific set of features, lands on Windows existing FTP programs for the Windows platform were struck with a wave of inferiority complex and panic. Cyberduck is poised to replace not only each and everyone of them but also standalone clients for Google Docs, Amazon S3 storage and a number of such web services that users might be using. 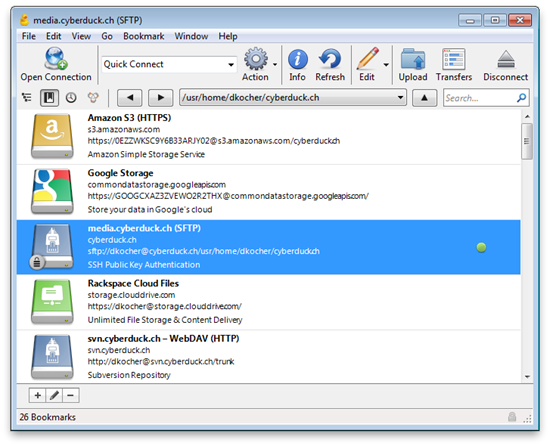 Aside from connecting to regular FTP and SFTP servers, Cyberduck can connect to any WebDAV server, as well as many popular services like Google Docs, Amazon S3, Rackspace, Windows Azure and more. If you are already using an FTP client, Cyberduck will promptly import all your bookmarks from them so that you can use it right away. Supported third party programs, the ones from where Cyberduck can import bookmarks, include Filezilla, SmartFTP, CrossFTP, CloudBerry Explorer for Amazon S3, Google Storage, Azure Blob and many more.