Around this time every year, Google releases what is known as Google Zeitgeist that showcases the top searched queries on Google search and the fastest rising and falling trend for the year gone by. This time Google has revamped the presentation with an interactive timescale, thanks to HTML5.

The new data visualization shows the rise and fall in search volume for queries surrounding the most important events of the past year, namely the Gulf Oil Spill, World Cup Football, Haiti earthquake, Olympics and the ash cloud following the eruptions of Eyjafjallajökull volcano in Iceland. You can compare the popularity between these events across the globe over the course of the year and watch as the colored bars, indicating these queries, grow and fall. 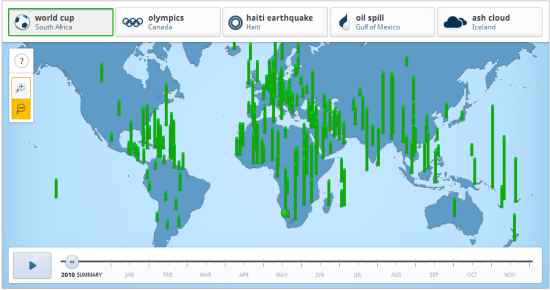 Here are some of the most interesting trends compared to Zeitgeist 2009.

Google has also created a Zeitgeist Year in Review Video to capture the phenomena that shaped 2010.

Last month Microsoft released their version of “Zeitgeist 2010” for Bing search engine. The list is a stark contrast to Google’s.

Most popular overall 2010 searches on Bing:

Most popular people searched in 2010 on Bing: