MakeMKV is a one-click solution to convert DVD and Blu-Ray video to the open standard MKV format that you can play on any video player. MakeMKV converts video clips into MKV files while retaining all video information in the original source files. Additionally MakeMKV can instantly stream decrypted video without intermediate conversion to wide range of players. But the strongest feature that makes MakeMKV stand apart from the crowd of other DVD rippers is the speed at which it operates. 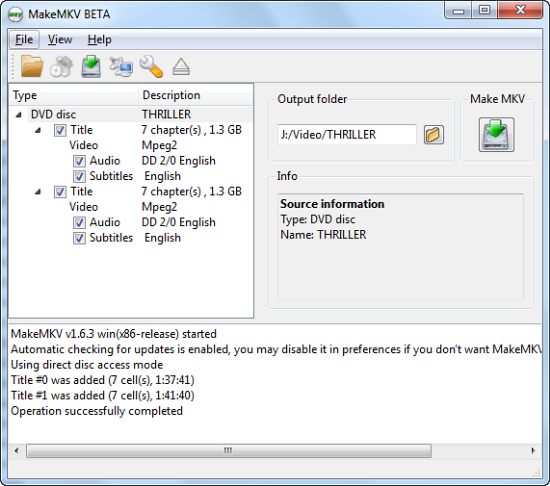 Ripping DVDs or Blu-Ray disks to the hard disk is a time consuming process. That’s because most DVD rippers re-encodes the video files to another format – a process that takes time but achieves a file size that is low. This is good if you are low on hard disk space and time is abundant. But mostly it is the other way around. People have 1TB and 3TB hard drives at home but so crunched for time that they read emails while commuting.

MakeMKV cleverly circumvents the time-issue by transcoding the MPEG-2 video of a DVD into an MKV container. The result is swift DVD ripping – the program can rip a DVD in under 10 to 15 minutes. The final video file is about the same size as the original, so you wouldn’t save much on disk space. But like I said, hard disk is no longer an issue.

The advantage of the MKV format is that it’s capable of holding unlimited number of video, audio and subtitle tracks, along with any metadata in a single file. This means that it is possible to put entire movie with multiple sound and subtitle tracks, DVD menus, chapters information and movie thumbnail, soft-subtitles into a single file. Besides, MKV is an open source format.

MakeMKV is currently in beta. Installers are available for Windows and Mac OSX.