Windows 7 has a useful feature called “VHD Boot” that lets you boot your entire Windows out of a Virtual Hard Disk file, as those used with Virtual PC or VMware. The machine is booted physically from this VHD file which is mounted as a virtual disk but used as a normal hard disk drive allowing you to install programs, create and save new files.

VBoot is a new software – a boot manager – from the makers of VMLite (which we wrote about earlier), that brings VHD booting capability to operating systems earlier than Windows 7 and even extending it to Linux. VBoot is, in fact, based on Grub, so that isn’t a surprise. 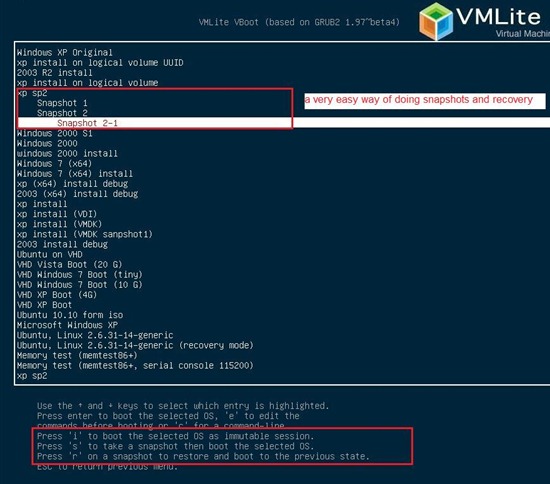 VBoot allows you to boot a physical computer from a single virtual disk file in VHD/VMDK/VDI/Raw format. It supports Windows 2000, Windows XP, Vista, Windows 7, 2003 Server, 2008 Server and Linux 2.6, 32- and 64-bit. Thus, using VBoot, you can natively boot any of the operating systems mentioned above from their VHD (or VMDK/VDI/Raw) file.

The VHD file can be created using a virtualization software like VMware or Virtual PC. VBoot also includes a tool that lets you create an empty VHD disk and then install the desired operating system into the VHD file from an ISO image or a CD. Existing VHD files must first be prepared for VBoot by running another tool, also included with the software.

VBoot also supports differencing disks which lets you recover to a prior state, or make the session immutable where all system changes will be discarded after reboot, and thus making it ideal to deal with any computer virus or spyware.

Full instructions on how to install and use VBoot are provided on their website.