Google Maps has added a fuel cost calculator to driving directions on Google Maps in Europe. When a user asks for driving direction between two places on the map, it shows an estimate of how much cash your have to spend in order to procure fuel for the journey.

The estimated fuel cost appears at the bottom of the list of driving directions. If you click on the estimation, you can change the fuel type from petrol to diesel, as well as customize what type of car you drive – whether it’s a high consumption, standard or compact model. 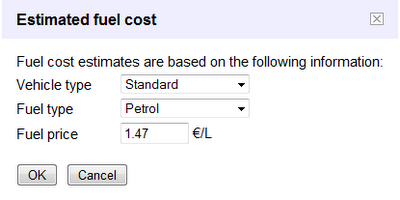 At the moment the estimated fuel costs appears only in driving directions in Europe. Google hasn’t mentioned about this update in any of the Google owned blogs so this could be just a test before they officially roll out this feature to all regions, hopefully, as well as to the Google Maps Navigation app for Android and iPhone.