Movie-Censorship.com is a fascinating website that provides amazingly detailed comparisons between different versions of movie releases – theatrical release, DVD release, Director’s Cut, Unrated edition and releases in different languages. You can learn what extra has been added into the director’s cut, and find out about scenes which has been deleted from the movie. It explains, in great length, the original script of the movies and how it was modified and why. If you are movie fan, Movie-Censorship.com can be a goddamn productivity killer.

Different versions of a movie?

For those who aren’t aware, some movies exist in different edited versions. Anybody who has bought a movie DVD or downloaded pirated versions from torrents must have encountered terms like theatrical release, director’s cut and unrated edition. What happens is that during making of a movie hundreds of hours of video footage are shot, from which scenes are carefully selected and arranged together to produce the movie. To bring the length of the movie to an optimal duration, often a compromise has to be made between the script and the runtime. Finally a version of the movie, usually between 90 and 120 minutes is selected to be released in theatre, which becomes the theatrical release.

The movie that is supposed to represent the director’s own approved edit, before the editor trims it down for public release is called the director’s cut. To quote from Wikipedia,

Director’s cuts generally remain unreleased to the public because, as far as film is concerned, with most film studios the director does not have a final cut privilege. The studio (whose investment is at risk) can insist on changes that they feel will make the film more likely to succeed at the box office. This sometimes means a happier ending or less ambiguity, but more often means that the film is simply shortened to provide more screenings per day. The most common form of director’s cut is therefore to have extra scenes added, often making the "new" film considerably longer than the "original".

Usually, the director’s cut tend to be better than the theatrical release, but this might not always be the case, as is in Donnie Darko.

An Unrated or NR (Not Rated) movie on the other hand, is the version before the MPAA (Motion Picture Association of America’s film-rating system) puts their scissors to it.

Movie-Censorship.com is a wonderful resource of information about these different versions that exist for a movie. It’s amazing how some script change during the production process; entire subplots are dropped making the movie worse, in some cases, and better in others. For instance, in Terminator 2: The Judgment Day, there was a scene where Arnold’s skull was opened, the CPU removed and tinkered with so that the T-1000 could learn. The deleted scene explains that Skynet set his brain to read-only mode before sending him into the past. 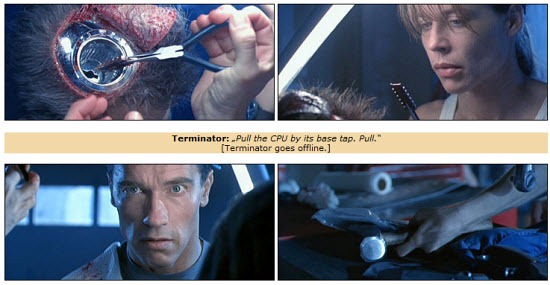 In another deleted scene from the same movie, John Conner is shown to become a U.S Senator. You can’t see the actual deleted scene in the form of video – just screen grabs – which is a little disappointing.

Apart from deleted scenes and script deviation, you get to read movie-trivia and what happened behind the scene during the production and so on. A good time killer for movie junkies.