It is hard not to waste time online. With so many distractions on the Internet, if you don’t have a strong will or some kind of time management strategy, your productivity takes a serious hit. One way to improve your productivity and cut the time spent on time-wasting sites is to monitor how you spend time on the Internet, analyze your online habit and make adjustments accordingly.

Chrome users can install the Time Tracker extension – a simple tool that attempts to track how much time users spend on various web sites by detecting user activity such as mouse movements and keyboard use. The timer pauses if no user activity is detected. 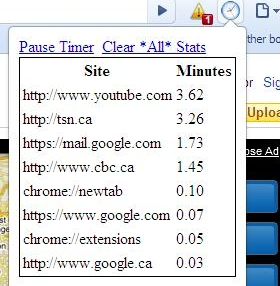 If you are looking for something more than a simple timer, you can check out RescueTime. This tool sits in the background and measures which site is in focus and for how long. You can check out detailed browsing stats to see how much time you spend on individual web sites, which days your most productive on, and more. It automatically stops the timer if your mouse and keyboard aren’t used for 2 minutes or more. It also allows you to manually stop measuring via a “pause” button. 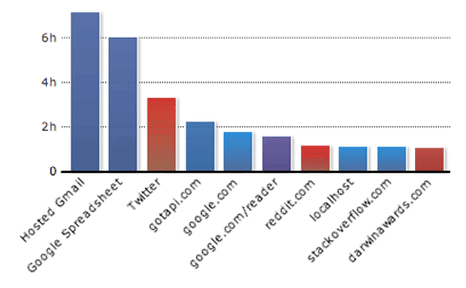 RescueTime also calculates a productivity score for you and lets you compare data with other users across the world.

Once you have identified the time wasters, you should restrict the time you spent on them. StayFocusd is a Chrome extension that helps you focus on your work by restricting the amount of time you can spend browsing time-wasting websites. Once your allotted time for the day has been used up, the sites you have blocked will be inaccessible for the rest of the day. It is highly configurable, allowing you to block or allow entire sites, specific subdomains, specific paths, or even specific pages.

There are at least two usable time tracking extensions for Firefox – RescueTime and PageAddict – none of which supports Firefox 4, unfortunately.

The PageAddict project is essentially dead – the developer website is parked and the extension has not been updated since March 2007. RescueTime is definitely an active program but somehow they are completely ignoring the newer versions of Firefox.

If you happen to use an older version of Firefox you can checkout any of these two. RescueTime, I have already described in the previous section on Chrome. The PageAddict addon, aside from tracking and displaying statistics about your online habits, allows you to tag and identify a certain group of websites and then put time restrictions on them. You can also choose to ignore a site from your report if you want.

To block distracting websites, you can also install a dedicated Firefox addon called LeechBlock. In LeechBlock you can create up to six ‘block sets’ each set containing a number of sites that are to be blocked during a specific time interval. 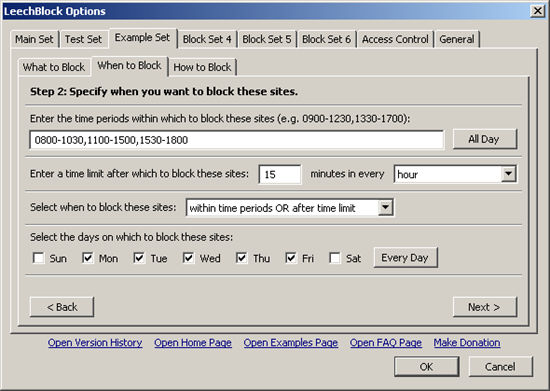 For example, you can create a block set and put all the social networking sites in it and block all those sites together for a set period of time. You can create another block set containing another bunch of time-consuming sites and block them for a different time period.

Opera is new to the extension business so there aren’t many options at this moment. There is one called OpTimer that logs the time you spent on various sites in Opera and displays a list of sites you spend the most time on. The timer stops counting when Opera is not in focus or minimised. 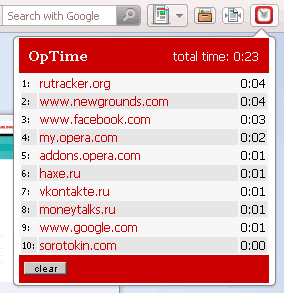 There is also a timer display on the extension button, that shows the hours:minutes you have spent on current site, so that quick glance at the button allows you to get the time without opening the list.

The smallest unit of time in OpTimer is 1 minute. The developer has ignored the seconds count maybe due to lack of display space in the button, but that omission surely makes the timer a little less accurate.