Google Reader can count only up to 1000, after which it basically goes lazy and just adds a plus (+) sign after the unread message count. Anything over 1000, whether that be 1500, 3500 or 5000, is shown as 1000+ unread messages. If you subscribe to many feeds it doesn’t take really long to hit the one thousand mark, after which you can quickly lose track of how many unread articles you actually have in your reader. 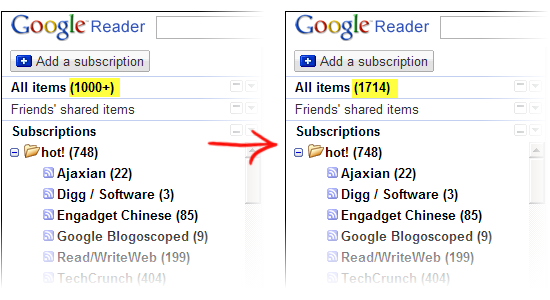 The script and the extension sums up the unread item count of each feed and displays the total as the actual unread count.

The script/extension, however, suffers from one flaw – it still depends on Google Reader’s count number for each feed when calculating the total. So if any of those figures i.e. the unread count for a single feed, exceeds 1000, Google Reader, as usual, puts the number at 1000+. When that happens the total count number is messed up again.

Just don’t let the feed count for any of the feeds cross the damned figure, and you will be fine. In any case, if you haven’t read a feed for the last 1000 publications you should probably unsubscribe from it.