BlueGriffon is a new, graphical WYSIWYG web editor that supports the latest HTML5 and CSS3 standards, and is based on Gecko 2.0, the rendering engine that powers Firefox 4.0.

Bluegriffon complies with the W3C’s web standards, and can create and edit pages in accordance to HTML 4, XHTML 1.0, HTML 5 and XHTML 5. It supports CSS 2.1 and all parts of CSS 3 already implemented by Gecko. BlueGriffon also includes SVG-edit, an XUL-based editor for SVG that is originally distributed as an add-on to Firefox and was adapted to BlueGriffon. 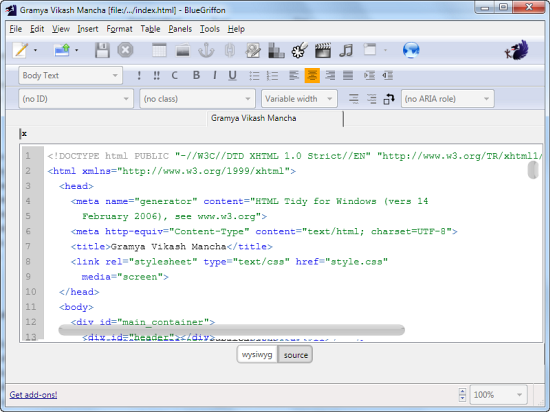 The support for CSS3 enables you to easily apply transforms, transitions, shadows, linear and radial gradients, border images, and more. BlueGriffon automates the insertion of styles into the document, which means that you can apply these styles to your style sheet without having to know the actual CSS codes. Similarly, BlueGriffon allows you to directly embed different HTML 5 elements from a menu including audio and video.

BlueGriffon also supports CSS Media Queries, a major feature of CSS 3, allowing you to apply stylesheets based not only on the medium (styles for screen, mobile, print, …) but also depending on the features of the rendering device.

Additionally, BlueGriffon comes with web fonts baked into the program. It has an interface that allows you to add web fonts from the Google Font Directory and the FontSquirrel repository to a document directly from within the editor.

The built in SVG editor allows you to draw vectorial graphics from within BlueGriffon to embed them into your documents. For HTML 4 documents that does not natively accept SVG markup, BlueGriffon automatically add the necessary chunk of JavaScript code enabling SVG rendering in the HTML 4 document. Cool!

BlueGriffon is free to download and is available on Windows, Mac OS X and Linux