Mozilla Lab’s Home Dash is an ambitious project that attempts to re-model Firefox 4’s interface in a way never tried before by any browser. The addon has seen 4 new updates since we last wrote about it less than a month ago.

Currently at version 6, Home Dash strips Firefox of regular browser elements such as location bar, search bar, bookmarks bar and tabs, and instead presents a dashboard like interface. Even the dashboard is hidden by default. It can be pulled into view by clicking on a tiny, barely visible Firefox logo on the top left corner of the browser. 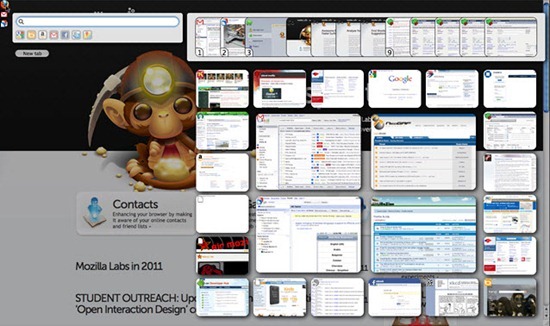 The dashboard has a search box on the top left, and a row of thumbnails adjacent to it that represents opened tabs. Beneath the thumbnails is a grid of 24 more thumbnails that displays the user’s most visited websites.

Until version 6, there was no way to customize the appearance of these thumbnails which are nothing but snapshots of the website. This has been changed.

Instead of taking snapshots of the entire visible area of the page, you can now adjust which portion of the page you want to be visible in the thumbnail. This you can do by adjusting the height and width of the snapshot placeholder (which means that placeholders can be of any rectangular shape and size) and zooming it to the right size to fit into the placeholder.

In the screenshot above, the snapshots has been adjusted to show the site’s logo so that it is immediately recognizable. On a related note, you can do the same with Opera speed dial. Learn how.

You can also pin sites to the dashboard, a feature added on the 4th iteration of the addon.

Mozilla says that in the near future, users will be able to add and remove these pages so that the snapshots aren’t just limited to the users frequently visited sites. Later on, it could be possible to even share these groups with friends.

Just like with any software updated, Home Dash version 6 squishes a lot of bugs such as saving thumbnails across restarts, automatically resizing Home Dash for full screen and Windows with glass, avoiding plugin restarts, and more.