CPU throttling or dynamic frequency scaling is a technique where the frequency or clock of the microprocessor is reduced to conserve power. A throttled CPU runs at a speed less than capacity. This is the opposite of overclocking

Laptop CPUs are commonly throttled down to conserve power and reduce the amount of heat generated by the chip. Since energy comes from a battery and thus is limited, CPU throttling improves battery performance. It also reduces requirement for expensive cooling mechanism. With less heat output, system cooling fans could also be throttled down or turned off, reducing noise levels and further decreasing power consumption. Of course, these benefits come at a disadvantage –reduced overall performance. 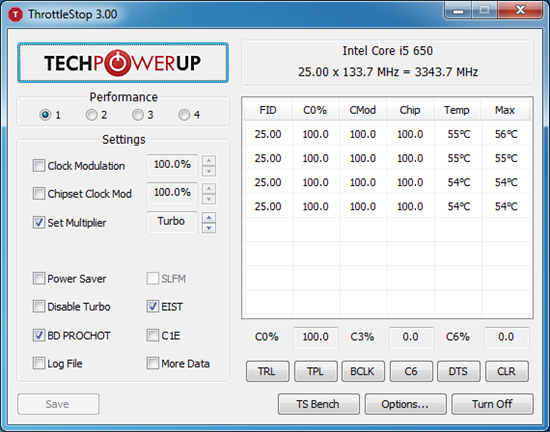 ThrottleStop is a small application that is designed to improve performance and speed of Intel Core 2 and Core i line of CPUs by disabling CPU throttling imposed upon by some desktop and laptop manufacturers. ThrottleStop thus enables you to run your computer at its designated speed and capacity.

When using ThrottleStop, it is strongly recommended to monitor power consumption at the wall with a Kill-a-Watt meter or similar device and make sure that you don’t exceed the power capabilities of your power adapter. Use of ThrottleStop to bypass these throttling schemes is at your own risk and can result in permanent damage to your power adapter or computer or both which may not be covered by your warranty.