Last week Google dealt a big blow on content farms and scrapper sites that copy content from others and essentially all blogs in general. The algorithm change, which I reckon, you have heard, read and experienced yourself by now is aimed to move sites with “original” content to the top of search results and push down sites with “low quality” content to the bottom.

The trouble is – there is no clear way to distinguish between sites that carry articles with “in-depth reports” and “thoughtful analysis” from the ones that don’t. As a result, a large number of blogs and innocent sites have been negatively impacted by the algorithm change.

From what I could gather from Twitter and discussion forums, many legitimate sites have reported organic traffic drop as high as 50% to 60%, and 25% drop in traffic seems to be “normal”. The change has been currently made only to the US. Eventually, it will be rolled out to the rest of the regions and that means even worse days are ahead for bloggers and webmasters.

What everybody wants to know now is whether the content farms were affected by this change.

German SEO consulting company Sistrix, which specializes in linkbuilding progress of their customer and their competitors domains, took upon this task. The company analyzed 1 million keywords and noted rankings of website before and after the update in the U.S. index. It then ranked these by a “visibility” index value that Sistrix created, which takes into account the number of keyword positions lost, specific ranking position and estimated clickthrough rate from those results.

Below is the table of the 25 biggest losers in absolute losses. 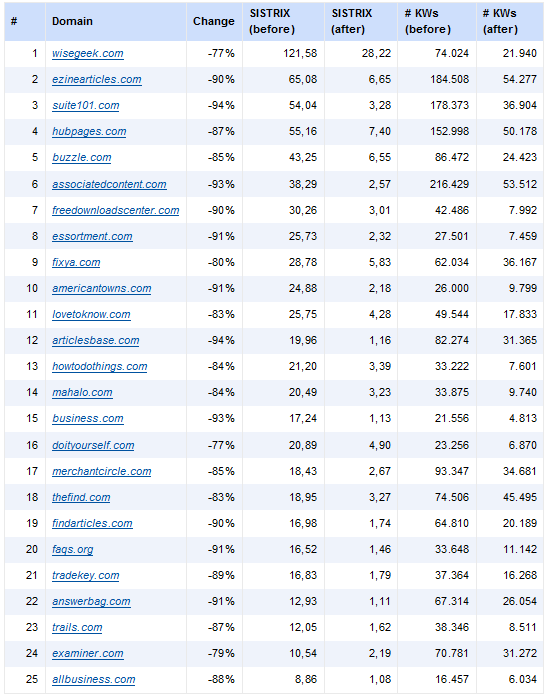 Over at Search Engine Land, Danny Sullivan obtained the full list of 331 domains that were found to have lost rankings from Sistrix and carried his own analysis resulting in some new tables. These tables show the top 100 domains that suffered losses sorted by total number of keyword positions lost by absolute numbers as well as by percentage.

Most of the usual suspects are there – Associated Content, Ezine Articles, Suite101.com, Hubpages, Mahalo, and FindArticles among others. On the surface, the algorithm update looks successful, but what has not been taken into account are the vast number of smaller but good quality sites that got nuked. Collateral damage, you might argue, is bound to happen. But we are talking about 11.8% of all searches – a big number and subsequently a big damage on innocent bystanders.

Looking back at the list, you will notice that eHow and Huffingtonpost escaped. In fact, eHow’s ranking actually went up, along with YouTube, Facebook and eBay. How did that happen? The possibility is that sites that were ranked above eHow got devalued resulting in automatic boosting of the site’s ranking.

So has the quality of Google search improved since the algorithm change? Not necessarily, as evident from eHow’s case. Many legit sites have disappeared from the search pages and their places taken by other low quality sites. I believe, it won’t be long when content farms find another way to beat the system and find their way back into Google.