Do you use Evernote? Do you use Gmail? If the answers to both questions are yes, you should use EvImSync. It’s a free tool that synchronize Evernote notebooks with a GMail account. The notes in Evernote are uploaded to your GMail account as emails, and stored in a folder of your choice. 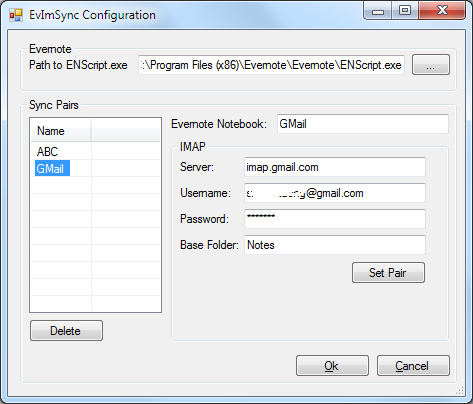 EvImSync uses the Evernote script engine ENScript.exe to import and export notes. These notes are parsed and then compared to emails in your GMail account using the IMAP protocol, so you need to have IMAP in your GMail settings.

You can sync one notebook with one folder in a GMail account, and another notebook to another folder. EvImSync allows you to sync as many notebooks and GMail folders as you like.

A few things to consider:

The syncing is one-way only, meaning, it can sync only from Evernote to Gmail and not the other way around. So if you delete an email in GMail, that deletion is not reflected in Evernote. Instead, EvImSync uploads the note from Evernote again to GMail. So if you want to delete a note, you must do that in Evernote, not in your GMail account. The same goes for tags. To delete a tag, you have to delete it from Evernote.