Zooniverse is a citizen science portal that offers enthusiastic members of the public to participate in scientific research projects – projects that requires immense amount of man hours and which cannot be automated. Zooniverse was originally started in 2007 as Galaxy Zoo (previously) in which the public was enlisted to classify galaxies in images from the Sloan Digital Sky Survey. Since then it added others such as Milky Way project, Galaxy Zoo Hubble, Galaxy Zoo Supernovae, and Solar StormWatch among others. 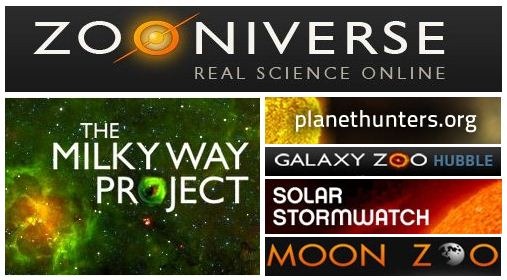 We have quite a large number of space telescopes, both terrestrial and orbiting, and probes that take hundreds and thousands of images of the sky and send them to earth for astronomers to study. Each of these images consist of millions of galaxies that must be observed and analyzed minutely for specific features. This is a giant task. The vast range of features, shapes, brightness and colors that these galaxies and stars can take makes the job even trickier and this is something that cannot be offloaded to a computer.

So the guys hit on the idea of crowd sourcing. The idea was to distribute the images to members of the public and, after a short tutorial, ask them to do the classification instead. By asking lots of different people to classify the same image, researchers found that the average score was just as good as the classification given by professional astronomers. And thus Galaxy Zoo was born.

Today, Galaxy Zoo, which has since evolved into Zooniverse, engages in different projects based on the core principle of participation of the public. These include:

To take part in any of these projects you have to signup and take short tutorial. The tutorials are usually brief and to-the-point and teaches you exactly what to look for in the images. Don’t worry if you don’t understand the science behind it, though it is a very good idea to get educated on the subject.

Zooniverse gives you an exceptional opportunity to take part in some of the most exciting and fascinating scientific undertaking of our time – the Kepler mission and the Hubble telescope forever unraveling the mysteries of deep space. You don’t need a degree in astronomy, nor a telescope. Just pure passion, the willingness to learn and lots of patience and, of course, free time.

In less than four years, Zooniverse has grown to 400,000 members and together they have supplied over 100 million classifications. Zooniverse is now a powerful force in astronomy. Why not be a part of it?

Don’t have time to get involved? There are others ways to help like offering your computer’s idle time to science research.