Prox Network is offering free VPN service for anonymous browsing with servers located in Netherlands. Prox Network, which runs a network of proxy servers, is said to be used by 600,000 monthly visitors, generating an estimated 6 million pageviews and 14TB of traffic every month. They are currently testing PPTP based VPN service.

Most people want to use VPN service for unblocking region restrictions when accessing websites such as Hulu and Pandora. But Prox Network’s VPN servers are located in Netherlands, so you can’t use them to access US based services. Only when anonymity is desired when normal web surfing, using Skype and sharing files, Prox Network VPN comes to use. 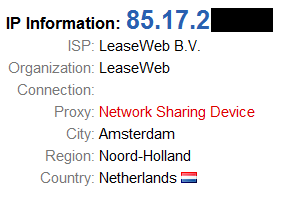 If their webpage is any indication of features to come, it is possible that Prox Network might start offering US based VPN service in the future.

Prox Network says that the traffic between their users and their VPN servers is encrypted and they do not keep traffic logs. Users are still advised to uncheck the IPv6 protocol from their connection setting as it poses a security risk for PPTP based VPN connection.

To use Prox Network VPN, simply create a new VPN connection with the following credentials.

Related: Turn Google Talk into a VPN, share and sync files with GBridge