Mondays are boring. That’s why we bring you a game today. It’s called Famous Objects from Classic Movies.

The game shows an illustration of an object and you have to guess the name of the movie the object comes from. The object is often closely related to the movie – it may come from the movie poster, it may be a part of the movie plot or it may even be figurative. 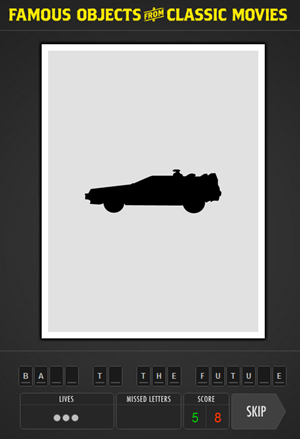 Anybody who has played hangman, knows the rules. Each letter or alphabet in the name of the movie is replaced with an empty space. You guess letters by typing from the keyboard. If the guessed letter occurs in the word, it appears in all its correct positions. If you make a wrong guess and the letter doesn’t appear anywhere in the name, you lose a life. You get a total of 3 lives before which you have to correctly guess the name.

Apart from requiring a moderate amount of knowledge about movies, players must use the same strategy one uses when playing hangman, such as calling out vowels first, usually starting with E – it being the most common letter in the English alphabet. According to Wikipedia, the 12 most commonly occurring letters are, in descending order: e-t-a-o-i-n-s-h-r-d-l-u.

So that’s a little tip from me. Get started!