Recently, NASA released a gigantic 24,000-pixel square mosaic of the Moon’s nearside as never seen before in this kind of detail and clarity. The image is a mosaic of 1,300 black-and-white pictures and weighs a whopping 550MB in size. Supposing your computer can handle an image of that size, you can download it from here. 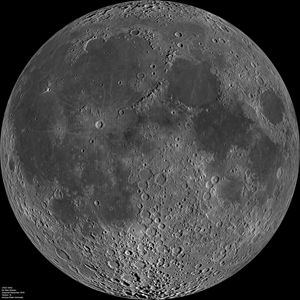 From Sky and Telescope,

"As the Moon rotated under LRO’s orbit," explains LROC team leader Mark Robinson (Arizona State University), "the ground track progressed from east to west (right to left in this mosaic)." The image run was timed to keep the Sun high up in the lunar sky but not straight overhead (its altitude varied from 69° to 82°). This created enough shadowing to define crater rims and other topography crisply, unlike the shadow-free view that we see during a full Moon. The combined image shows slight banding where the 1,024-pixel-wide swaths were stitched together.

The Lunar Reconnaissance Orbiter Camera (LROC) itself is quite unremarkable. Weighing in at just 2 pounds (0.9 kg), the LROC’s wide-angle camera is small enough to fit in your hand. It features an aperture only 1.2 mm across and a focal length of just 6 mm (for visible-light work). Yet from LRO’s very low orbit, currently at 30Km, this simple camera can pick out surface details as small as 250 feet (75 m).

Imagine how the images would have turned out if the LRO had on board a DSLR with a telephoto lens.