Ever since the invention of the integrated circuit by Jack Kilby in 1958, for which he was awarded the Noble Prize in Physics, these tiny silicon wafers have found their way into almost every common household appliances and electronic and electrical device you have ever heard of. Then came the revolutionary microprocessors – tiny computers with on board RAM, CPU and program storage packed on a single die. Microprocessors marked the beginning of the explosive and rapid growth in digital electronics.

Last month, PCMag ran an article on these ubiquitous tiny computers hidden inside ridiculous places. Most of the items they dissected to reveal microprocessors inside didn’t surprise me a lot, like XBox controllers, timers, routers and carbon monoxide detectors. One would expect to find microprocessors in such devices. But I was taken aback by the home pregnancy test kit. 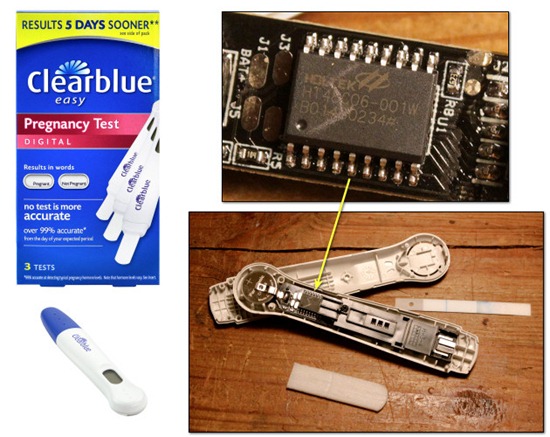 Apparently, a simple $5 and throw-away digital pregnancy test kit have a full-fledged computer-controlled laboratory inside. The one PCMag broke open contained an 8-bit Holtek HT48C06 RISC microcontroller with 1792 bytes of program storage space and 64 bytes of RAM.

That may not sound like much by today’s standards, but when you consider that they pack more computing power than early desktop computers like the Apple II, it is surprising how far we have come.

On a related note, the US Space Shuttle fleet, which is soon to be retired next month, runs on a computer with just 1MB onboard memory.

Such an antiquated computer works just fine for NASA. The shuttle doesn’t need to support a powerful graphics engine or create PowerPoint presentations or store MP3s. It focuses entirely on raw functions—thrusters on, thrusters off—which, though mathematically complex, don’t require the juice that a user interface like Windows calls for. The GPC has flown so many missions with hardly a hiccup that there’s no reason to replace it, even if it is just 0.005 percent as powerful as an Xbox 360. Besides, a complete overhaul would be horrendously expensive. The GPC’s software would have to be completely reconfigured for a modern computer and tested until proven flawless.

The space shuttle is beaten only by the Russian Soyuz space vehicle, in the department of scarce resources, which since 1974 has been running Argon-16 flight-computer software with just 6KB of RAM. In 2003 the Russians rewrote some of the spacecraft’s software, which experts suspect led to its subsequent crash-landing in a desert in Kazakhstan.