Many audio editing programs, such as Adobe Audition and the open source Audacity, allows you to import RAW, unprocessed audio data into the program. A YouTube user who goes by the username r2blend discovered that you can import virtually any file into Adobe Audition and listen to the sound it generates. He experimented with Microsoft Paint program’s executable and discovered this:

If are you using Windows 7 you can try it too.

Locate c:WindowsSystem32mspaint.exe and load it into Audacity. 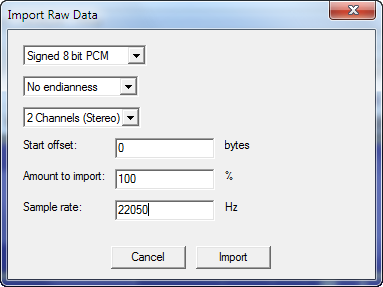 Now click on the Play button. The awesome starts around 1:20.

What we did is imported the ones and zeroes that comprises the file mspaint.exe, into Audacity and instructed the program to read the data as Pulse Code Modulated stream at 8-bits per sample, 22,050 samples per second and two channels of track. This resulted in an analog waveform that was fed into the computer’s speakers.

Pulse-code modulation (PCM) is the most basic method used to digitally represent sampled analog signals. The method was invented in 1937, and since then had found use in all sorts of communication and recording technologies such as in digital telephone systems, Compact Disc, Blu-ray and DVD formats.