Love history? Then prepare to get yourself time-sucked into the world of wars and battles at this fascinating website that I discovered recently.

Conflict History is an interactive timeline and map of conflicts throughout recorded history – every significant battle fought by man since the last 6000 years. 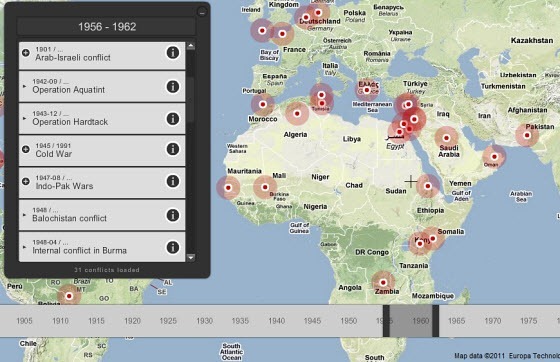 Use the timeline by year below the map to navigate between different periods of time and watch red circles pop over at places where conflicts had occurred. The timeline can be used in multiple different ways. One way is to grab the black bar and slide it across the visible portion of the timeline. Another way is to click on the left and right arrows on either end of the timeline to either progress or go back in time. You can also adjust the width of the black bar that indicates the period of time covered. You can either narrow it down to load conflicts by year or widen it to load conflicts by 5, 10, 15 or up to 100 years at once. The slider goes all the way back to 4000BC, which is pretty much the time when man started keeping record of events.

Once you halt your time machine at a particular period, a list of wars pertaining to that period will load. Clicking on the “i” button slides open a window that loads an article about the war with a link to read more about the conflict at Wikipedia.

Scroll through the decades, and you’ll learn an awful lot of things about man’s violent nature. For example, as you progress from one century to the next, particularly after the 16th-17th century, you will notice that the number of conflicts rises phenomenally. According to one source, 14,500 wars have taken place between 3500 BC and the late 20th century, costing 3.5 billion lives, leaving only 300 years of peace. Go ponder. 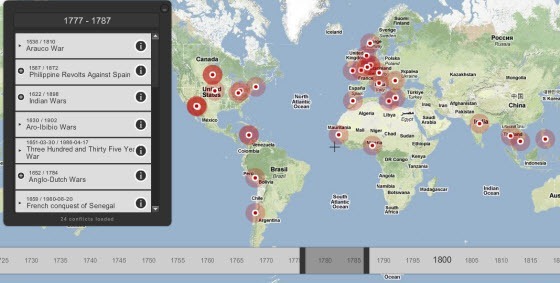 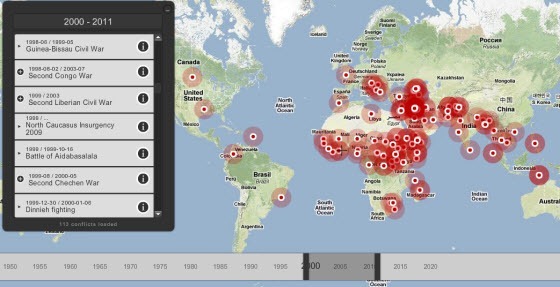