Mozilla has just released the first Alpha or Aurora (Nightly build) of Firefox 6.0 offering users an early glimpse into the browser. Aurora is the new development channel that Mozilla introduced in addition to Central, Beta and Stable Releases. The Aurora channel will be the next development channel after the central channel, where new features will be tested to be either included into the Beta or dropped. 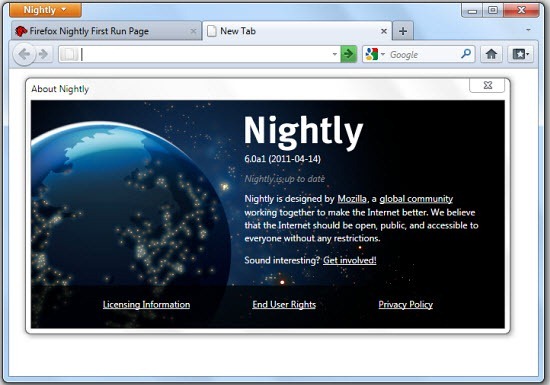 Last week Mozilla’s Engineering Project Manager, Christian Legnitto, had posted a draft detailing the release schedule for Firefox 5, 6 and 7. According to the draft, each build will start from the Central branch and move on to Aurora, then Beta and finally released. The plan is to have each new Firefox release spent 6 weeks in each of the four repositories, which means we could see a fresh build of a major Firefox release every six weeks and a new stable release every 24 weeks.

The first Aurora of Firefox 6.0 appeared on schedule indicating that things are proceeding according to plan. Firefox 5 will be slightly different from future releases due to the development overlap with Firefox 4. Rather than 6 weeks for mozilla-central, mozilla-aurora, and mozilla-beta version 5 will spend 3 weeks for development on mozilla-central, 5 weeks to converge and stabilize on mozilla-aurora, and 5 weeks to validate on mozilla-beta.

If you do the math, Firefox 5.0 could be released as early as June or July 2011. Firefox 7.0 mozilla-central is planned to start on May 17th.