The SETI (Search for Extra-Terrestrial Intelligence) institute has effectively given up search for intelligent life on alien planets for lack of interest and funding. The 42 20-foot wide dish telescopes operated by SETI were shut down last week because the government was unwilling to fund the project. The Allen Telescope Array requires just $5 million to operate over the next two years. 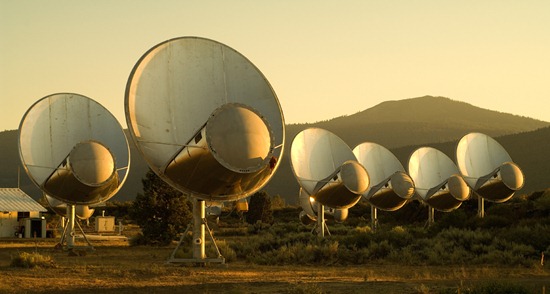 The timing couldn’t be worse, say SETI scientists. After millenniums of musings, this spring astronomers announced that 1,235 new possible planets had been observed by Kepler, a telescope on a space satellite. They predict that dozens of these planets will be Earth-sized — and some will be in the "habitable zone," where the temperatures are just right for liquid water, a prerequisite of life as we know it.

"There is a huge irony," said SETI Director Jill Tarter, "that a time when we discover so many planets to look at, we don’t have the operating funds to listen."

The SETI Institute’s mission is to explore the origin, nature and prevalence of life in the universe. The program uses telescopes to listen for out of the ordinary radio waves that intelligent life on other planets could be broadcasting.

The Allen Telescope Array was originally envisioned to be 350 radio-wave antennas, but the fund crunch came early on and only 42 telescopes could be realized, mostly by private funding, a significant portion – $25 million out of the $50 million raised – came from Microsoft co-founder Paul Allen.

The Allen array is not the only radio telescope facility that can be used for SETI searches, but it is the best. Elsewhere, scientists have to borrow time on other telescopes.

Meanwhile, other SETI projects such as the setiQuest Explorer, an application that allows citizen volunteers to look for patterns from existing data that might have been missed by existing algorithms will continue.