uTorrent has officially released the long-awaited version 3.0 Beta of their popular BitTorrent client. Version 3 has added a number of new features, the most notable ones being the ability to watch streaming videos as you download, as well as rate and comment on torrents so that other uTorrent users can see from within uTorrent and thus find high quality torrents easily.

One of the most anticipated new features is the option to rate and comment on torrent files added to uTorrent. Users of Vuze and Azureus has had it for years, and it was one of the most requested function for uTorrent. Aside from leaving comments, users of uTorrent 3.0 can also rate torrent files by awarding them one to five stars. 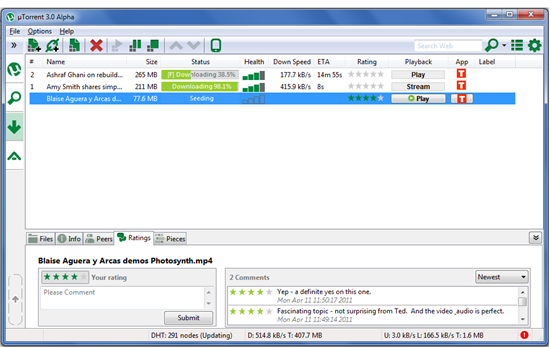 The other interesting feature is the option to stream video before the download finishes. You must remember that steaming was introduced as an experimental feature as early as 2009 in uTorrent 2.1 beta. This has now matured enough to be included to the core uTorrent functionality. Streaming can be used to preview video files or to watch while downloading.

Technically it is possible to use any BitTorrent client to stream videos by prioritizing the download of the first pieces. Stream Torrent has even demonstrated this feature.

uTorrent 3 also sports an overhauled interface which is somewhat simpler and cleaner than the previous versions. To get new users quickly adapt themselves to BitTorrent in general and uTorrent in particular, a new “getting started” guide is prominently displayed in the client.

Another area that underwent change is the creating of torrents. Torrents can now be created by simply dragging and dropping files to the “drop files to send” area in the bottom left-hand corner. uTorrent will automatically create the torrent and start seeding. Users then get a link to share the torrent with their friends directly

uTorrent 3.0 is a recommended upgrade to all those who enjoy using this versatile BitTorrent client.