Microsoft is planning to boost the security of Windows 8 by implementing SmartScreen file checking inside the operating system to shield users from malicious applications. SmartScreen is a file verification utility that will check downloaded files, or for that matter, any files against a dynamic list of known illegal, viral, fraudulent, or malicious URLs that Microsoft identifies and maintains online. If a match is found, Windows 8 will prevent the application from executing.

The SmartScreen filter setting will be found under Windows explorer Folder Options, as shown in the screenshot. Apparently, users will be allowed to enable or disable the feature by unchecking the appropriate checkboxes. 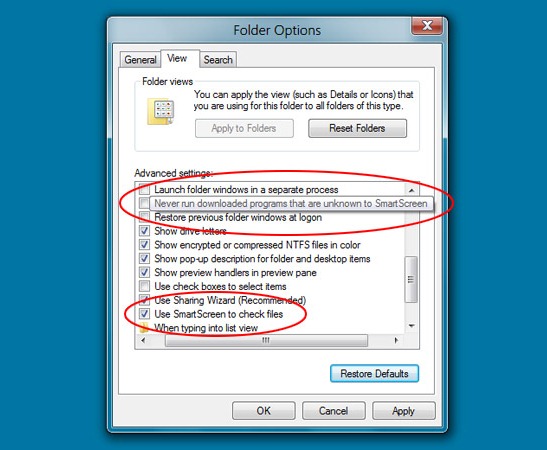 According to Long Zheng, who discovered the feature in a leaked Windows 8 build, the SmartScreen filter in Windows 8 appears to serve two purposes – to reactively check the file system and proactively prevent any downloaded applications from running that are unknown to the filter.

In other words, only those files that were checked by SmartScreen and successfully cleared the security audition will be allowed to run. Files that are not yet scanned and rated by the service will be blocked as well. Evidently, this will lead to false positives as it is impossible for the service to ‘know’ all files and applications available on the web or on a user’s computer. False positives have indeed been reported in the past and this has always been an issue with any pre-verified filter technology such as McAfee SiteAdvisor or BitDefender TrafficLight.

The SmartScreen Filter technology was previously and still used in both Internet Explorer and Windows Live Messenger to intercept malicious URLs and downloads. This technology will now feature natively inside Windows 8.

SmartScreen Filter is definitely not a replacement for third party security tool and anti-virus application, but will function as another line of defense against malware.