Marble is an open source virtual globe and world atlas software, very much like Google Erath, that lets you pan and zoom around and look up places, streets, airports and geographical features like mountains and lakes, and rivers.

The application start ups fairly quickly, and ships with a minimal but useful offline dataset that lets you use the software without internet access. But higher resolution imagery and maps will become unavailable if there is no internet connection. I also found the software to be much more responsive than Google Earth. The most striking feature of Marble is the availability of multiple map views. The default is the familiar classroom type atlas. You can change this is to satellite view, open street view, satellite view at night, historical view of circa 1689, temperature and precipitation maps. Eleven different map views are available – additional maps, including those for Venus and Mars, can be downloaded from Marble’s website. Marbles can also open Google Earth KML maps and GPS data based GPX files. 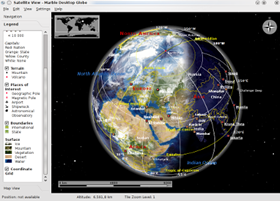 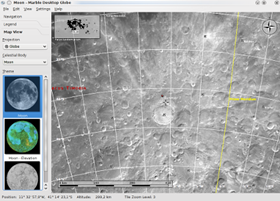 Aside from globe, Marbles features flat and Mercator projection styles.

Marble comes with a small database of more than 12,000 locations (cities, mountains, volcanoes) which can be searched for and which are partially integrated with the popular Internet encyclopedia Wikipedia. Additional options include places of interest, co-ordinates of any location, measure distances using multiple measure points, get routing or driving directions between two places, change date and time and watch how the starry sky and the twilight zone on the map change. You can also view photos and real time temperature and weather condition of any place on earth.

Marble is a free software and is available for all major operating systems (Linux/Unix, MS Windows and Mac OS X).