Until now, Opera had no separate channels for development builds like those on Google Chrome (Canary channel, Dev channel) and Firefox (Aurora and Nightly). Users wishing to try out new snapshots of work-in-progress builds of the Opera browser were forced to abandon the stable version because two different versions were not made to exist together. This is now changed with the introduction of Opera Next – the developer channel of the browser. 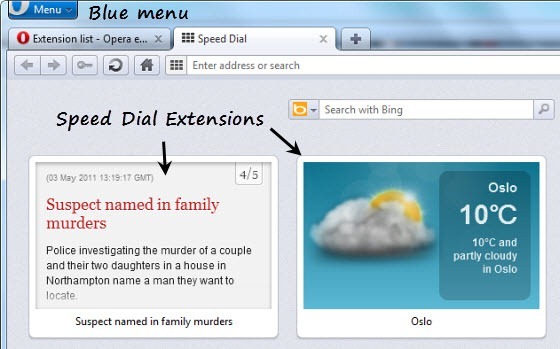 Opera Next is a stand-alone installation of the Opera desktop browser that can be installed alongside with your stable installation of Opera. Opera Next will feature new technologies and improvements that are under development, and will always be automatically updated to the latest snapshot build as they become available. Users can prevent automatic download of future snapshots by deselecting the Download All Snapshots option in opera:config. This will download only landmark releases such as alpha, beta and release candidates while ignoring intermediate snapshots builds.

Version 11.50, code named Swordfish, is the first to be released under Opera Next. To make it easy to distinguish between the stable release and Opera Next, it sports a new whitish icon and the menu background is blue instead of red.

With password synchronization all saved passwords on Wand will be synchronized across browsers on different computers. You can enable it when you set up link for the first time or in the Synchronization Options dialog.

The second feature is a new extension engine for speed dial. Speed Dial extensions are like small web pages embedded in your Speed Dial which allow developers to make live previews of web pages or other nice decorations. A few Speed Dial Extensions are showcased – there is a weather report extension that shows current temperature and weather info directly on the speed dial, a live RSS reader, a clock and a few more.

If you use Opera I encourage you to try Opera Next.