After months of speculation, Google confirmed that YouTube will indeed be offering Hollywood movies for rent through the YouTube Movies service. YouTube has partnered up with Universal, Sony Pictures, Warner Bros, Lionsgate Films, Starz, The Weinstein Company, and Magnolia Pictures and others to offer full length feature films including a slew of recent blockbusters such as Inception and The King’s Speech. Already 3000 titles has been added to the catalog. 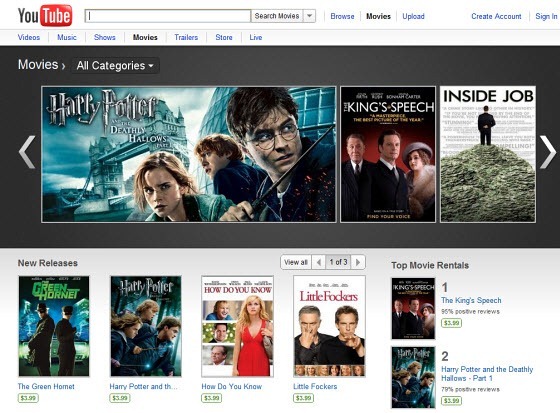 YouTube Movies was launched in 2009 and contained a selected library of over hundreds of full length and free-to-stream movies including a number of Indian (Bollywood) ones. Starting today a huge number of memorable hits and cult classics like Caddyshack, Goodfellas, Scarface, and Taxi Driver to blockbuster new releases like Inception, The King’s Speech, Little Fockers, The Green Hornet and Despicable Me are on display. Movies are available to rent at industry standard pricing which is $2.99, but most new releases ask a slightly higher $3.99.

Movies will be available for steaming via the browser and can also be accessed through Google TV. For most movies, viewers will have 30 days to begin watching their rental. Once they start watching the movie they will typically have 24 hours to finish.

Unfortunately, this service is only available in the US, as if Netflix, Hulu and Amazon were not enough. Damn you, America!