All digital camera makers advertise their products in terms of megapixel and zoom. The megapixel myth has been debunked several times in the past. What about zoom? Is it another marketing tool to get people to buy large zoom cameras?

Digital Camera makers often use the zoom ratio of a camera to hoodwink you into thinking that it means image magnification. When a camera is advertised to have 5X zoom or 10X zoom, they want you to believe that shooting pictures at that zoom ratio will magnify your images 5 and 10 times respectively. They do not.

What does X mean in a digital camera?

In telescope and binocular terminology, a magnification of 10X indicate that an object viewed via that binocular from a particular position appears approximately the same size as if viewed from 1/10th the distance, unaided or ten times as close. This isn’t the case with digital camera, because the zoom ratio in your camera is not the same as the magnification ratio on telescopes. 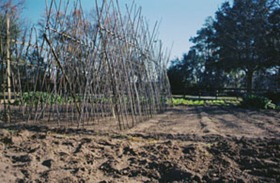 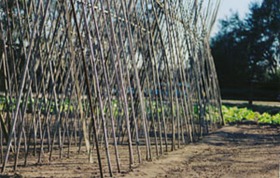 Photos taken with a 28 mm lens (left) and with a 70 mm lens (right) show change in angle of view (or field of view). Image credit: Wikipedia

The 18 mm to 180 mm camera has more wide angle capability, while the 24 mm to 240 mm camera has more telephoto capability. The shorter focal length (18mm) of the 18mm-180mm lens gives you a greater field of view, meaning you can cram more imagery in your photo when taken at 18 mm or 1X zoom, as compared to 24 mm on a 24mm-240mm camera. On the other hand, the larger local length (240 mm) of the 24mm-240mm lens allows you to come optically closer to the subject, i.e. larger telescopic magnification, compared to the 18mm-180mm camera.

What really matters is the focal length of the zoom lens, not the ratio. 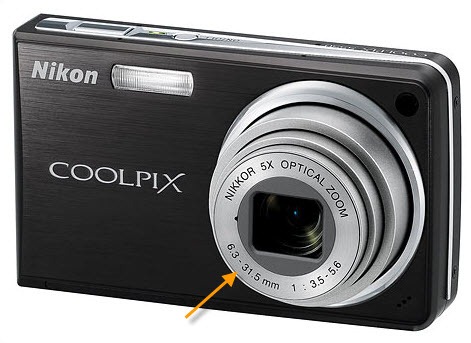 When you are buying digital cameras, disregard the advertised zoom ratio and instead find the 35mm equivalent focal length of the camera lens and then compare models – find out which one offer you greater wide angle or telephoto capability.

Now that you know what zoom ratio is and how the focal length of the zoom lens affect the camera’s output, let’s return back to our original question: What is the magnification of your digital camera?

How do I calculate my camera’s magnification?

When you say an object is magnified, the question that arises is – magnified with respect to what? Obviously, to the unaided human eye. So to calculate the magnification of a camera of a particular focal length, we have to know the 35mm equivalent focal length of the human eye. The figure has been put around 50 mm.

A lens with focal length of 50 mm (also called normal lens) reproduces perspective that generally looks natural to a human observer. In other words, a 50 mm lens has approximately the same angle of view (or field of view) as the human eye. Lenses of shorter focal length are hence called wide-angle lenses because they allow us to “see more” than the human eye could. Objects viewed through a wide-angle lens appear contracted. These lens have magnification less than 1.

Lens whose focal length is longer than 50 mm are referred to as telephoto lens because they allow us to “see further” than the human eye could. Objects viewed through a telephoto lens appear expanded or magnified.

Our example Nikon COOLPIX S550 camera, with 35mm equivalent focal length of 36mm-180mm, thus has an optical magnification ranging from 36/50 mm to 180/50 mm, or 0.72 to 3.6. Notice how the camera is advertised as 5X zoom but achieves only 3.6 magnification. Technically, Nikon is correct – 5X is the zoom ratio and not magnification, but they are riding on the buyer’s ignorance to misled us into believing otherwise.

But you shouldn’t worry about magnification. As already mentioned, the key is focal length, and with camera megapixel thrown in, magnification becomes a murky term.

Say you have two cameras – one is 3MP and the other 9MP, and both have identical focal lengths. You shoot the same object from the same distance at the same focal length with both cameras and then open the images on your computer. You will notice that the 9MP camera produces an image approximately three times magnified compared to the one by the 3MP camera, even though both were shot with the same focal length. 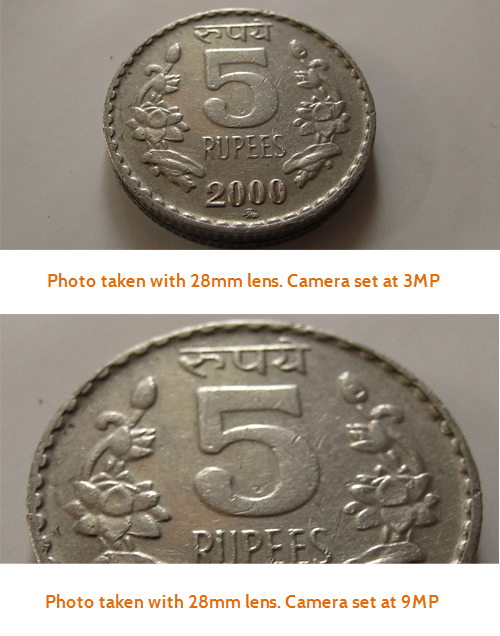 Optically, both have the same magnification but because the 9MP camera has more pixels to record the light, the produced image appears magnified. When printing, the one taken with the 9MP camera can be blown up to a size larger than can be done with the one taken with the 3MP camera. So does the larger megapixel camera produce bigger and sharper images? Bigger: yes; sharper: not necessarily. What matters is the quality of the pixel (or the sensor) and not the quantity.

Sharpness depends more on your photographic skill than the number of megapixels, because most people’s sloppy technique or subject motion blurs the image more than the width of a microscopic pixel.