You are watching a good afternoon movie on your computer after which you plan to take a nap. You might even doze off while the movie is running, if it doesn’t turn up to be that good. The computer continues to run, of course, wasting precious energy long after the movie has ended, or after you dozed off, whichever comes earlier. This, unless you drag yourself across the room to turn it off. You have a remote? That’s good. But you still have to turn it off, and that’s no good if you are sleeping. Of all the things a computer is capable of doing, can’t it switch itself off after a movie has ended? Sure it can. This is how to set your computer up.

Download Movie Sleep Timer. I suppose, you don’t need an explanation for a program which is so descriptively named. Anyways, this is what the program author has to say about it:

Actually, I would strike Windows Media Player from the paragraph above, because I tried and it didn’t work. It works with only VLC media player, at least for now. 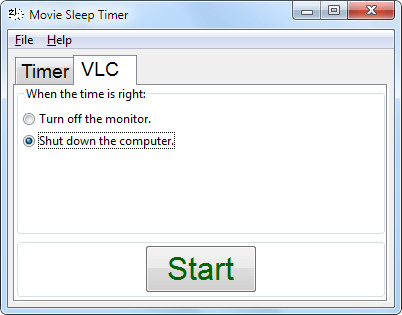 Launch Movie Sleep Timer, go to the VLC tab and choose one of the two options – shutdown the computer or turn off monitor. Then click on the Start button. The program will then wait for you to open VLC media player and start playing a video. When the video ends Movie Sleep Timer will automatically perform the action you have chosen. Clicking the Stop button will make the program stop monitoring VLC media player, so that the computer won’t shutdown after the video ends. 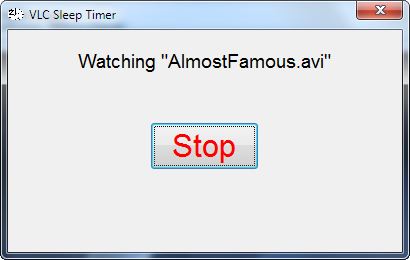 Movie Sleep Timer also has a shutdown timer where you can set a countdown timer in hours, minutes and seconds after the end of which it will either shutdown the computer or turn off the monitor.

Movie Sleep Timer is a fantastic invention. I’m surprised that in the long history of media players there is not one that could automatically shutdown the computer after playback.