Instantbird is a cross platform, open source, multiple protocol supporting instant messaging client which has just reached version 1.0. The project was announced back in 2007 and was under development since then. Over the last fours years developers have been releasing working versions with small version numbers – the next one due to be released was 0.3 – before the team decided to abandon the petty updates and jumped directly to version 1.0. 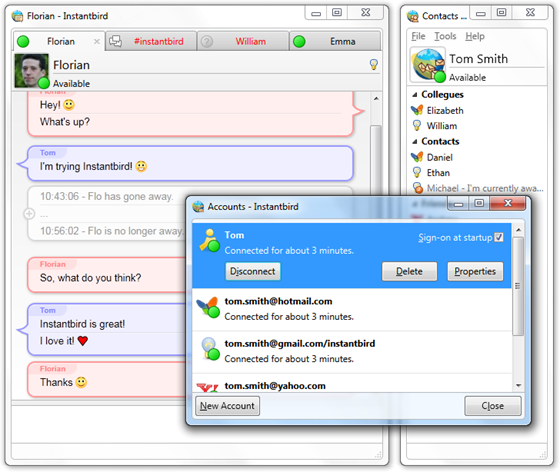 Instantbird supports AIM, Facebook Chat, Google Talk, Twitter, MSN Messenger, XMPP, Yahoo! Messenger and many other IM protocols. It also supports other protocols, such as LiveJournal’s LJ Talk, ICQ, IRC, MySpaceIM, etc through add-ons. There are over 250 add-ons currently available which offer a range of functionality including themes, language packs, dictionaries, developer tools and usability enhancements such as highlighting of specified words, colorizing of buddies, tab completion of nicknames, vertical tabs and so on.

Although Instantbird is based upon code from various Mozilla projects, the project is completely independent of the Mozilla Foundation.