Evolution Player is an unconventional media player that allows you to listen to your music library and use a community voting system to automatically download new music with creative commons license from other users or from music sharing sites like Jamendo and Magnatune.

To listen to music all you need to do is click on the Play button. The player will download random music, from Jamendo and other Evolution Player users, and play like a radio station. But unlike your radio you can train the Evolution Player to play the music you like. To do so, you need to vote when you like a piece of music, and vote if you don’t like it by clicking on one of the smilies. 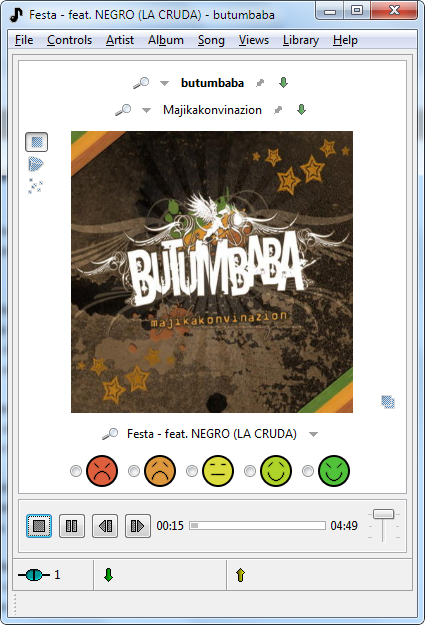 If a style of music finds enough fans then it will not die, even if a majority does not like the style. The music will find a habitat it can life in. The result of the evolution will therefore not be a common, average, boring, made-by-managers taste like you hear on radio. No, there will be as many tastes as users.

To make this system work, it is essential that users vote every music they hear and enabling sharing of songs with other users. When you find a song you like, it is possible to see other music from the same artist or album, and download them all at once. To prevent the player from downloading certain music, you can also maintain a list of banned artist.

You can also share music from your own collection. If you do so, the developers recommends to share only creative commons music that can be shared legally, so as not to turn Evolution Player into another illegal P2P sharing software.

Evolution Player is portable. All music that are downloaded are saved in a sub-directory within the player’s directory, and neatly organized by artist and album.