Ellora Assets Corporation has announced the availability of Freemake Video Converter 2.2 beta, that promises improved conversion speeds by up to 50% in HD video conversion. This is made possible through the added support for DirectX Video Acceleration.

DirectX Video Acceleration (DXVA) is an API for Windows that allows video decoding to be hardware accelerated by the graphics processor. Freemake Video Converter is already capable of offloading certain CPU intensive operations such as motion compensation and deinterlacing to Nvidia CUDA based GPUs, if available. The added support for DXVA will now allow the software to take advantage of a wider range of GPUs, particularly non-NVidia based, such as those from ATI. 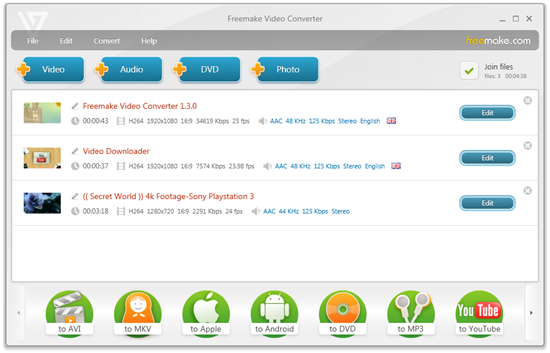 The video converter also features a brand new algorithm of optimal parameters detection: it can switch on/off CUDA and DXVA to provide the fastest video conversion for each particular case. To fully benefit from the hardware accelerated real-time conversion, users must have a modern graphics card and a powerful motherboard. It must be noted that the program supports only DXVA 2.0, which is compatible with Windows 7 and Vista, but not Windows XP.

Freemake Video Converter, which I reviewed previously, is a very handy video conversion utility. It accepts over 200 different input file formats including video, audio and pictures. It can also import videos from a DVD, and convert videos into DVDs. You can also create DVD slideshows from your pictures, and do other things like join videos, split and trim, rotate and flip horizontally or vertically.