Food Force is an educational game published by the United Nations World Food Programme (WFP) in 2005, intended to generate awareness among the younger generation about global hunger, and how the WPF works by enabling kids to take on the logistical challenges of delivering food aid in a major humanitarian crisis.

The game takes place on the fictional island of Sheylan in the Indian Ocean, which is suffering from both drought and civil war. The player’s character is a rookie who has joined a team of UN experts, including a nutritionist, a logistics officer, a pilot, an appeals officer, and the director of food purchasing. With tens of thousands of Sheylan’s residents displaced and in urgent need of food aid, players are required to pilot helicopters on reconnaissance missions, airdrop high energy biscuits to internally displaced person (IDP) camps, negotiate with armed rebels on a food convoy run and use food aid to help rebuild villages. 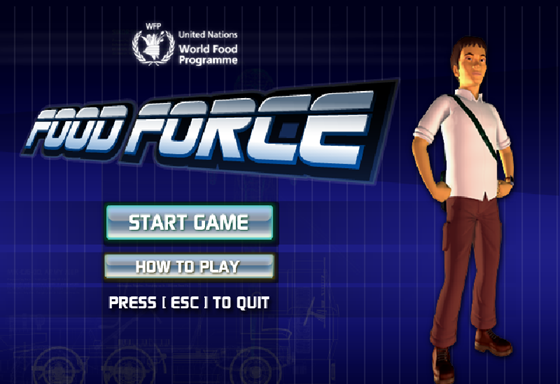 A total of six missions make up the complete game, which is little more than 220 Megabytes in download size. While playing the game’s different missions alongside a team of emergency aid workers, players are faced with a number of realistic challenges faced by the WPF in its emergency responses both to the tsunami and other hunger crises around the world.

Most of the gameplay is arcade oriented, with time-limited sequences. All six missions can be played through in under an hour, though players might replay the individual missions, and submit their high scores online for comparison with other players around the world.

Food Force is available as a free download, with versions for the Windows and Mac.

Inspired by Food Force, an open source sequel of the game Food Force 2, has been developed and can be downloaded from Google Project Hosting. Food Force 2 is playable on Linux, Windows and Mac OSX platforms.