Often when a new service is launched by Internet giants such as Google, Amazon and Facebook, it is primarily targeted to the US audience, leaving the rest of the world smacking their lips. But Google seems to have different intensions with Google+.

It is evident that Google wants all onboard Google+, and if the complete redesign of all major Google services to match the color scheme of Google+ is any indication, the company is very serious about their latest venture. In order to gain traction among people of the third world countries, particularly India’s one billion strong population, Google has launched an exclusive post by SMS feature for Indian users.

This is hardly surprising, as smartphones are rare in India and, indeed in other developing countries, and so is mobile Internet connectivity. In such a market, SMS makes sense.

To update Google+ through text messages, go to Google+ settings and enter your mobile phone number following which Google will text you a verification code. Upon activation, a new ‘Phone’ column will become visible next to ‘Email’ under the ‘Receive notification’ section. You can configure the activities in which to receive SMS notification, such as when someone shares a post or mentions you, adds you to circle, leaves a comment etc. 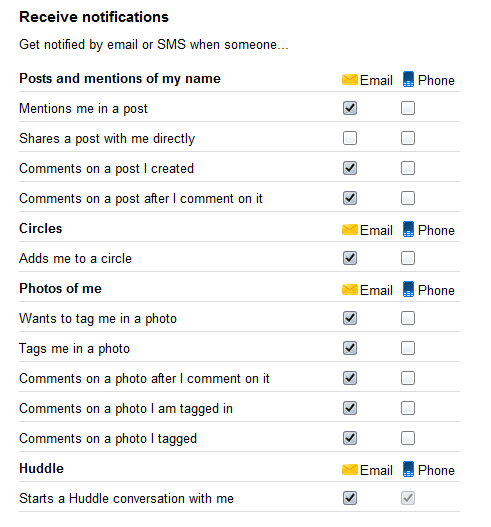 While these notifications are also available to US users, Indian users get the additional benefit of being able to post to their Google+ stream by texting a message to 9222222222 at no extra cost. This update will be visible to all your circles by default and you will be charged as per the standard message rates from your carrier.

All SMS shortcuts are summarized below.

@[circle name]
To share with a specific circle, append your post with @[circle name]. For example: "Will see you at the game @soccerfolks".

@extended
To share with everyone in your extended circles , append your post with @extended. For example: "Any SF restaurant recommendations? @extended".

@public
To share your post publicly, append your post with @public. Public posts are viewable by anyone on the web. For example: “Any SF restaurant recommendations? @public”.  When you share something publicly, it may appear in search results.

To ensure your phone number cannot be spoofed, it is advised to add a security PIN. This will prevent others from posting to your Google+ stream.

[via The Next Web]