The Silver release of MAGIX music creation software is a cutdown version of the functionally rich Pro editions. For instance, the number of audio channels has been reduced drastically to four, from 64 and 96 available in other MAGIX Music Maker editions. The number of sounds, loops and effects samples included has also been shrunk. 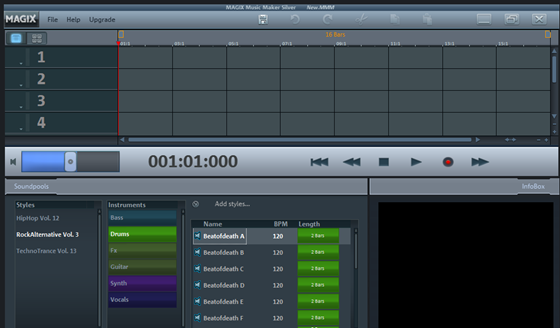 In the free version of the program, there are only three musical styles, and for each style there are a number of instruments to choose from – from hip hop bass and rock guitar to techno synths. You can listen to a sample in the preview area and then start dragging and dropping them in the timeline to create your own composition. You also have the option of importing music from CD, or recording your own samples with a microphone.

There are a number of special effects to choose from such as pitch shifting, reverb, echo and volume adjustment, each of which can be applied to samples on an individual basis. Completed audio tracks can be exported to a variety of formats including MP3, .ogg and .wav.