Windows 7 and Vista’s built-in firewall lacks a proper interface due to which configuration of the firewall is beyond most casual users. Free programs such as Windows 7 Firewall Control gives users more control on Windows 7 firewall allowing users to create application rules, zones, forward ports and more. Windows 7 Firewall Control converts the default Windows firewall into a full fledged firewall program. But if you are looking for something in between no control and full control, you should try Windows Firewall Notifier.

A click on the balloon notification displays a dialog box, allowing the user to: 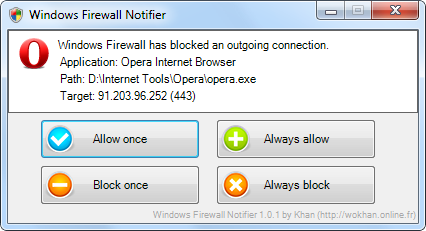 Windows Firewall Notifier is a nice utility but suffers from an absurd design problem. The program has no user interface and no permanent icon is visible in the system tray. When a user action is required, a balloon notification appears together with an icon that remains onscreen for two to three seconds after which it disappears. The notification may or may not reappear later. The user has to react within those few seconds when the notification is available.