Adobe has released a preview of its new HTML5 web design tool, Adobe Edge, that allows designers to create animated content for websites, using web standards like HTML5, JavaScript, and CSS3, through a movie editor like interface. The software has been released for free, and Adobe assures that it will remain so in the future.

Adobe Edge was first revealed last October at the annual Adobe Max show in Los Angeles. It’s not a replacement for Flash, but it definitely rivals the company’s Flash Professional tool when designing interactive content such as web advertisements and widgets. Adobe believes that both these technologies – Flash and HTML – can coexist, and we can only but agree since web standards such as HTML5 aren’t yet up to the task. 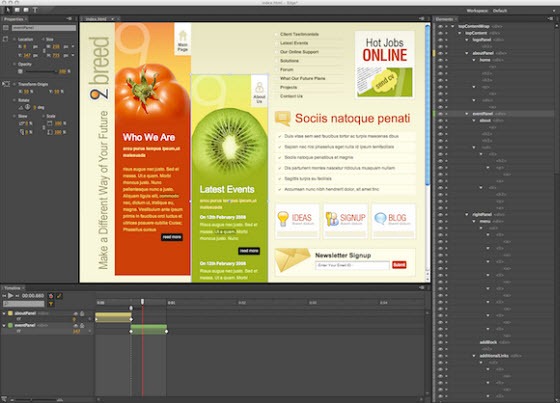 "What we’ve been doing for a long time is focusing on our runtime: Flash. And because the HTML5 ecosystem wasn’t really moving, we weren’t doing a lot there," said Paul Gubbay, Adobe’s vice president of engineering, design, and web. "But over the last couple of years, there’s been a tidal wave of change [with HTML], and as a result, as we’ve been listening to customers, we’ve committed to doing more in the browser."

With the Adobe Edge, you can import your existing site and add animations to HTML documents. Users can import standard web graphics, such as SVG, PNG, JPG and GIF files, style them with CSS, and apply up to 27 different transformations. There is also a live preview of the animation created, rendered in real time by an embedded WebKit browser engine. New features to be added to Edge as the project progresses.

Some key features of Adobe Edge: