While credit card companies usually have some kind of fraud protection services, it’s up to the consumer to be vigilant about any billing errors or hidden fees on credit card bills. Unless you thoroughly read your credit card and debit card statements it can be easy to miss things like double billing, and unwanted recurring charges when you’ve forgotten to cancel your subscription to a service.

BillGuard is a new free service that aims to solve this problem by alerting users of unwanted charges such as hidden fees, billing errors, scams and fraud on credit card bills. BillGuard, which touts itself as “antivirus for our bills”, monitors the web for complaints about credit card charges, as well as fraud reports received from other BillGuard users. When a charge has been flagged by another BillGuard user or complained about on the web, the service alerts you when a similar charge on your credit card appears. BillGuard also runs over 100 automated fraud-detection tests on all your transaction to detect suspicious activities. 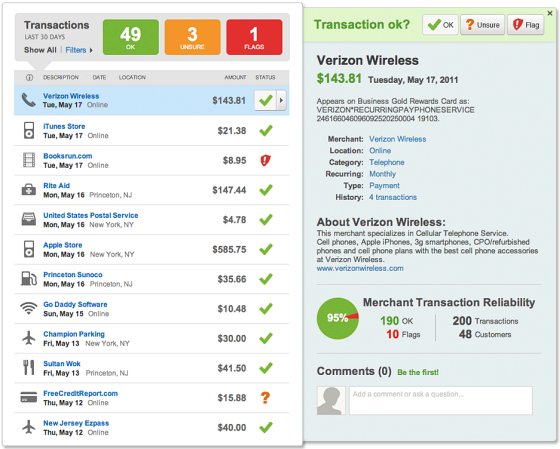 BillGuard’s interface also helps users quickly see and understand all transaction and points user’s attention to those that might be questionable. It gives users statistics and a detailed description of the merchant for each transaction.

Though many people would be wary at the idea of allowing a third-party to manage their financial security, BillGuard actually pose little risk. The site doesn’t store credit card data on its servers and has read-only access to credit statements.

The startup, which launched publicly on May this year, had $3 million in funding and had entered into partnerships discussions with some major banks and identity theft companies. According to BillGuard, they have saved users over $250,000 in just 2 months, their biggest find to date was a user who was not aware of a $30,000 fraudulent charge.