Today’s shoppers are increasingly using online reviews to help make purchase decisions on everything from cell phones to air conditioners to booking hotels and airlines. So it comes as no real surprise that some retailers are hiring review writers to post fake but positive reviews of their products on various websites. Good or bad reviews on popular sites such as Amazon, Yelp or TripAdvisor can profoundly affect public perception of a company’s product and eventually their bottom line. For consumers who constantly rely on online reviews before making any purchase decision, this is a serious problem they cannot afford to overlook.

It’s not always easy to differentiate fake reviews from genuine ones, but a team of researchers at Cornell University has been developing sophisticated automated methods to identify them, based on analysis of text. The algorithm looks for certain ‘deceptive indicators’ as described in the paper they published, to sniff out the fake ones.

An example of fake and genuine review. Can you tell which is what?

The researchers mixed 400 positive genuine reviews of Chicago hotels with 400 deceptive reviews produced for the study, and asked three human judges to tell them apart. They could not.

The fakes tended to be a narrative talking about their experience at the hotel using a lot of superlatives, but they were not very good on description. Naturally: They had never been there. Instead, they talked about why they were in Chicago. They also used words like “I” and “me” more frequently, as if to underline their own credibility. 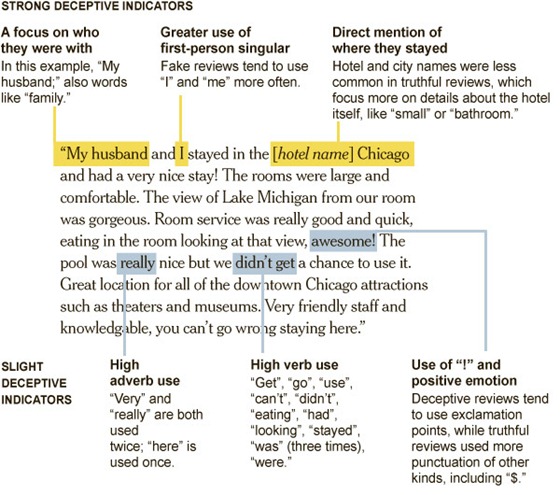 Of course, it is easy to train people to avoid cues for detection based on the finding of the paper. This is probably what’s going to happen in the future, and just like the war between spam and spam filters, review spammers are going to get better and better at beating the system.