It is not unusual for hardware manufacturers to partially disable certain features on high-end devices and sell them as low-end products to save cost in manufacturing. What is unusual is when they offer to unlock these features for extra cash. Intel had tried this trick before with Pentium G6951 and they are doing it again with the new Sandy Bridge processors.

Except the K-series, all Sandy Bridge processors ship with a locked multiplier that prevents users from overclocking. Intel is now offering to upgrade three of these processors – Core i3-2312M, Core i3-2102, and Pentium G622 using software. In order to upgrade, one would have to download the software from the Intel site, buy an upgrade card from a store, scratch the silver-off and enter the PIN code. After a reboot, the processors will have become upgraded.

The Core i3-2102 and Pentium G622 will get a bump in their clockspeed (and henceforth become the i3-2153 and G693, respectively), while the mobile chip Core i3-2312M will unlock some extra cache alongside a clockspeed boost (and turn into an i3-2393M). The result is a nice 15% to 20% performance boost without even opening up the case.

Intel has posted some benchmark graphs on their site to show how much extra performance the Upgrade Service can bring. 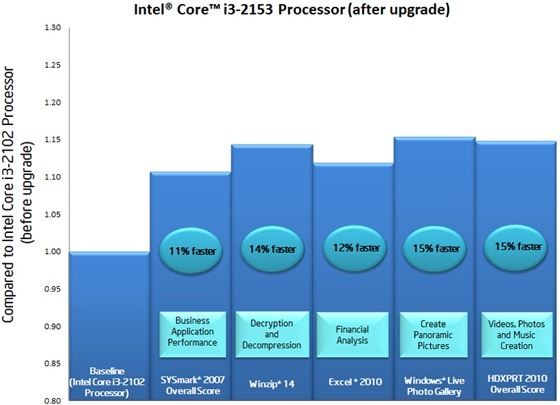 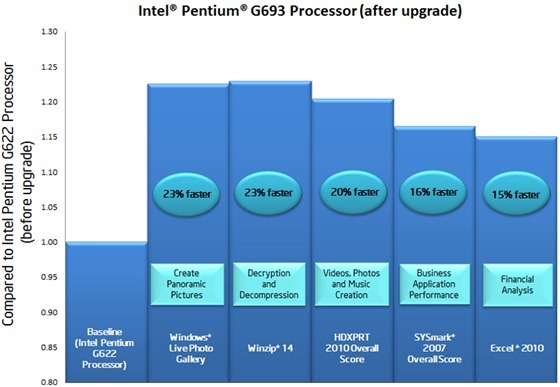 While regular overclockers might balk at the idea of shelling out extra cash for something the chips could already do from the beginning, for the rest who doesn’t know how to overclock, getting a significant improvement in performance without having to shop for a new CPU and at a fraction of the price, is an attractive idea.

Intel hasn’t disclosed the price for these Upgrade Cards, but unlocking the Pentium G6951 had cost $50.