Google has finally made it possible to use offline versions of their three most popular applications, namely, Gmail, Google Calendar, and Google Docs. Offline Gmail was announced back at Google I/O conference in May, and it was revealed that internally Google was using offline Gmail (and Calendar and Docs) for months before the May announcement. Starting today, offline Gmail will be available to all users. Offline access for Google Calendar and Google Docs will be rolled out from next week.

Previously Google offered offline access for Gmail, Calendar, and Docs through Google Gears. But Gears is no longer supported by Google. The new offline Gmail is based on HTML5 and currently available only for Chrome users through the Gmail Offline Chrome app. 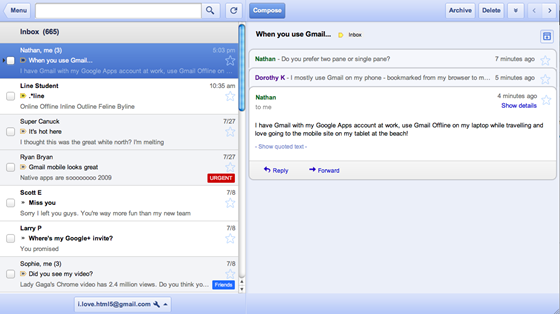 This HTML5-powered app is based on the Gmail web app for tablets, which was built to function with or without web access. After you install the Gmail Offline app from the Chrome Web Store, you can continue using Gmail when you lose your connection by clicking the Gmail Offline icon on Chrome’s “new tab” page. Even when offline, you can read, reply, send, and organize your email. All actions you execute will be stored locally on your computer, more specifically, inside Google Chrome browser’s storage on the computer. Once your computer is back online, the locally stored data will be synchronized with Google’s servers and every mail you composed while offline will be sent about on its way.

Google Calendar and Google Docs, when offline versions of these become available from next week, will let you seamlessly transition between on- and offline modes. When you’re offline in Google Calendar, you can view events from your calendars and RSVP to appointments. With Google Docs you can view documents and spreadsheets when you don’t have a connection. But offline editing isn’t ready yet.

Support for offline document editing and customizing the amount of email to be synchronized will be coming in the future. Google also assured that they are working to bring offline access to other browsers.