It is ill-advised to make changes to the Windows registry without backing it up first, but users being human beings often make the mistake of not heeding good advice, and end up with a broken computer or misbehaving program. When that happens download a free copy of YARU, short for Yet Another Registry Utility.

YARU is a simple registry viewer that can parse the Windows registry hives for deleted keys and display the results in a tree view. With a few clicks the deleted keys can be exported to a .REG file, and restored back to the system. 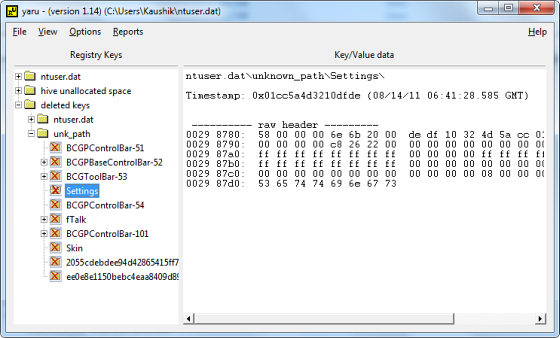 Unlike Windows registry editor (regedit) or third party registry viewers, YARU does not load the registry hive automatically. You have to do with from the File menu. Instead of loading the entire registry, YARU lets you load the hive or section you need. You can open the System, Software, Security, User, SAM, Component or BCD hive. You can also load keys from a .REG file.

When you load a particular hive into YARU, the program will display the branches in the hive in the familiar tree structure along with a ‘deleted keys’ branch.

However, because the registry hive is written with new data and keys hundreds of time on an active machine, deleted keys can get overwritten pretty quick – sometimes in less than an hour. So don’t expect to recover keys you deleted last week or even yesterday. It is recommended to fire up the programing immediately after you have deleted the key without attempting to use any other program or the Windows itself too much, to improve your chances of recovering the keys. If you are lucky, you might find your all important deleted key waiting to be recovered. Once you find the key, right click on it to export.

Sometimes, the deleted keys are only partially recovered. You might have the key but the path of key might be lost. Some keys might also contain corrupted data. In such cases, do not attempt to export and restore the key. Instead, right down the DWORD values and key names and enter them to the registry manually.

And remember to always back-up the registry.