When you backup contents of a Nokia phone, Nokia PC Suite creates a single backup file that contains names and phone numbers of all contacts, the complete SMS inbox, outbox, drafts, pictures saved in the phone memory, notes, phone settings etc., depending on what the user chooses to backup.

Nokia also has the reputation of randomly dropping support for older phones with every new release of Nokia PC Suite, which it an unreliable backup program. So if you are stuck with a backup file that you can’t open, or say, you lost the installer for Nokia PC Suite, then here is an alternative. 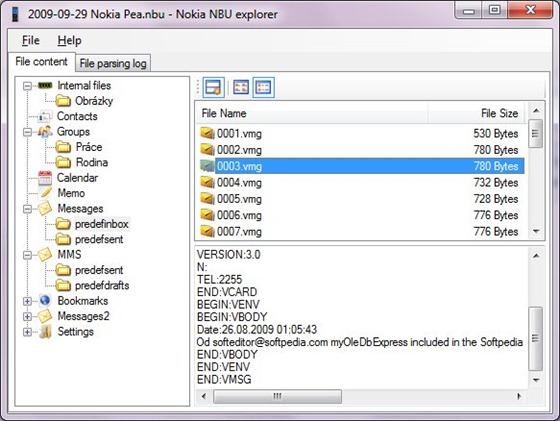 NbuExplorer is an open source program that can read Nokia Content Copier files NBU, NFB and NFC produced by Nokia PC Suite. It can also read ARC backup file, the archived phone memory on memory card. NbuExplorer can parse, display and extract contents within these files allowing users to easily retrieve data from them in a format that can be restored to another Nokia device.

NbuExplorer generates VCF files for each contact. Similarly, each SMS messages are saved as a VMG file, notes and memos as TXT and calendar entries are saved as VCS files. All music, images, including ringtones, themes etc. are saved in their original format.

The great thing about NbuExplorer is that you can view all contacts, read messages, notes and view images before you extract them. This allows you to selectively extract content from the backup file.

NbuExplorer can also be used to transfer contacts, SMS messages and other user files when you switch from a Nokia phone to another platform such as Android or Windows Mobile.