Google Chrome now includes a Text-to-Speech (TTS) API that’s simple to use, powerful, and flexible for users, revealed Dominic Mazzoni, Software Engineer. The TTS API enables developers to implement a speech engine in an extension for Chrome. Already a couple of extensions are available for download from Chrome Web Store that utilizes the TTS API. Among them SpeakIt is an interesting one.

The SpeakIt extension allows Chrome users to select text on a webpage and convert it to speech. The extension uses the Google Network TTS (Text-to-Speech) with language auto-detection, enabling it to read aloud all languages that are supported by Google, with the ability to expand Chrome’s speech capabilities by adding new TTS engines.

To read aloud text on a page, first select the text you want it to read and then click the SpeakIt icon. When it is ready to read, the number of sentences is shown on the icon and the selected text will be read aloud. To stop listening at any time click pause.

SpeakIt can be configured to use either the default SpeakIt voice or the Native voice engine of your operating system. The voice is crisp and very human like. A couple of additional voices are also available. You can adjust the default volume, and some voices also let you adjust pitch and speaking rate (words per minute). 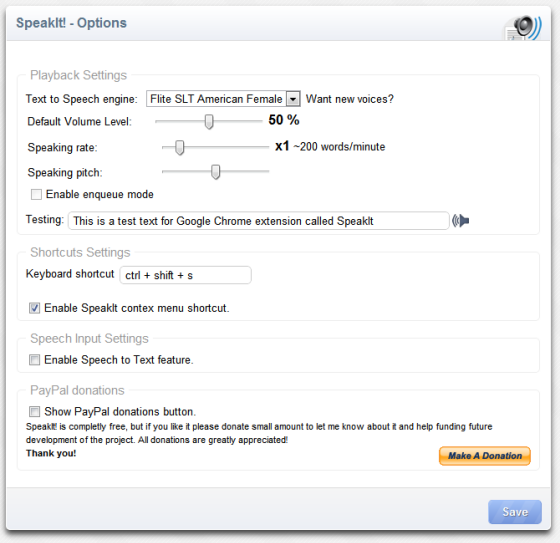 On the TTS API, Dominic Mazzoni explains, “These voices both use Native Client to synthesize speech. The experience is very easy for end users: just click and install one of those voices, and immediately any talking app or extension has the ability to speak using that voice.

If a user doesn’t have any voices installed, Chrome automatically speaks using the native speech capabilities of your Windows or Mac operating system, if possible. Chrome OS comes with a built-in speech engine, too. For now, there’s unfortunately no default voice support on Linux – but TTS is fully supported once users first install a voice from the Chrome Web Store.”