Over at Hack a Day, the electronics project website, Mike Szczys published a story about one William Dillon who, using homemade hardware and computer post processing, was able to pull images directly from the National Oceanic and Atmospheric Administration’s weather satellites. The NOA has got three weather satellites in low earth orbit that pass overhead a few times a day. Using the right combination of antenna, receiver and decoding software it is possible to grab the satellite’s uninterrupted data feed and extract the images taken by the satellite’s cameras. And this is entirely legal.

The article mentions a weather image decoding program for Windows (Linux, and Mac OS X) called WXtoImg, and another which runs under Linux called WXAPT and yet another that runs on Mac OS X called DSP Radio. 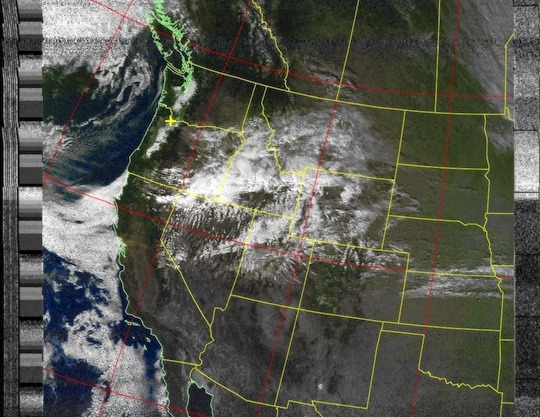 You do not need a tone decoder, hardware demodulator, or PC interface to use WXtoImg. These items are generally expensive, unnecessary, and produce inferior results. WXtoImg uses the 16-bit decoding capabilities of your computer’s soundcard and the power of modern processors to produce optimal results.

You need only a receiver, an antenna (and cable), and a cable to connect the receiver line/audio out to your computer’s soundcard. A pre-amplifier is generally unnecessary but may help when used with general purpose communication receivers and scanners.

Weather enthusiast can head over to this page that lists all hardware necessary for the project. Don’t worry if you are not capable of building their own circuits, because these receivers and antenna are available off-the-self from several online retailers at prices starting from around $200 for the receiver and about $160 for the antenna.

For those who aren’t motivated enough to invest in their own weather station, the data from many weather satellites are available through the web, in near real-time. This is the goal of the Rapid Response system, a NASA project, that provide near real-time imagery from the MODIS instrument for users who require an immediate view of a specific phenomenon from satellites. Refer to this page to learn more about imagery available through Rapid Response.