Just when you thought you knew which smartphone you were gonna upgrade to next, along comes the Galaxy Nexus and complicates matters. If you’re thinking its name bears an uncanny resemblance to the extremely successful Samsung Galaxy series, you’re barking up the right tree – Google worked with Samsung to release Galaxy Nexus contracts.

The smartphones of today are practical, sleek devices that exist to make your life more efficient and better organized.  You’ve probably already decided whether it’ll be an iPhone, HTC or BlackBerry you’ll be acquiring next. Then along comes a strange concoction known as Ice Cream Sandwich (no, really) to shake the market up. That is the name of the new Android operating system that is put to excellent use in Google’s Galaxy Nexus. Ice Cream Sandwich is the first version of Android to run on both tablets and phones, and Google has even created a swish optimized font for the purpose. Google claims that widgets have been improved dramatically and that the Galaxy Nexus provides the best mobile Gmail experience to date, including a number of offline search options. 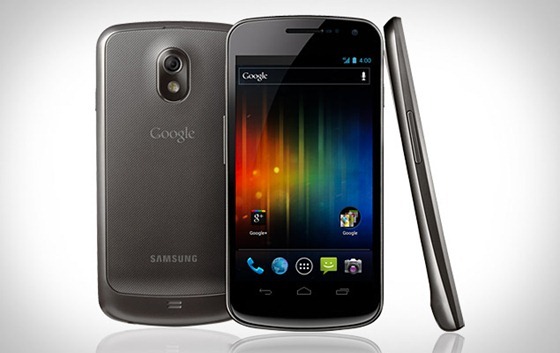 So what’s it like? Can it compete? The short answer is yes – here’s the long-winded explanation why…

Google have finally cracked what Apple understood long ago – that aesthetics are every bit as important (if not more so) than capabilities such as memory or battery to the average mobile user. The Galaxy Nexus eschews the iPhone’s somewhat cartoonish graphics (the leather at the side of the calendar, for example) and avoids Microsoft’s clinical look, opting instead for a phone with heart.

Have no fear though, for the heart and soul of the Galaxy Nexus can still kick your proverbial ass, technologically speaking. Everyone’s talking about the iPhone 4S and Siri, but with the Galaxy Nexus not only can you rapidly dictate texts and emails to your phone, but it also employs face-recognition software. Your phone just has to look at you and it opens up.

The camera is another big selling point with the Google-approved Nexus. There’s no lag between photos, meaning you don’t have to pause and make sure your photo has saved before taking another shot. You can click as many shots as you like without stopping, enabling you to truly capture the moment. It should be noted, however, that while most smartphones have an 8MP camera, the Galaxy Nexus has a measly five-mega-pixels to its name.

The camera is not one of the most impressive features of the handset, not in terms of hardware anyway. But Ice Cream Sandwich introduces lots of new software features for the camera that make it easier and more enjoyable to use than cameras found on other smartphones.

Face Detection has been available on many Android phones, but with Ice Cream Sandwich it now comes as a standard feature. The same is also true for Tap to Focus, continuous focus and the zero shutter lag and Ice Cream Sandwich now includes support for panoramic shots. The most impressive new camera feature though is probably the ability to take photographs while you are also recording video, essentially a snapshot of the video being recorded.

In a move that rivals the best Star Trek technology, the phone can beam files back and forth to other phones running Ice Cream Sandwich simply by placing the two devices side-by-side so that they’re touching — a neat trick made possible through the use of NFC (near-field communication) technology, something the iPhone 4S lacks.

This new feature is known as ‘Android Beam’ and allows users to share information between handsets just with a simple tap. You do not need to launch an Android Beam app to use this – once the two devices have connected you will be given to option to share whatever you are doing. This could be music, videos, web pages or even just a phone number. No longer will you need to check and double check that you have correctly entered a new acquaintances details – Android Beam will do it all for you.

One of the biggest difficulties many people have when acquiring a new smartphone contract is determining how much internet data they will require – particularly if they have never owned a smartphone before. 100MB, 500MB, a Gigabyte? The problem is that most people do not measure their internet usage this way. Ice Cream Sandwich can tell you when you’re using too much data for your phone plan — and cut you off if you allow it to.

No longer will you need to worry whether or not you have exceeded your monthly data allowance as you can keep track of how much you have used, stop yourself going over your allowance and really get to grips with what different internet activities are consuming in terms of megabytes.

Google’s Ice Cream Sandwich also includes a new “People” application, which is meant to help you stay more connected to friends and family. This is essentially an integration of various different social networks tied to your contacts’ personal info. This has been available on Android phones for some time with the likes of Motorola’s MotoBlur, Samsung’s People Hub and Sony Ericsson’s Timescape. With Ice Cream Sandwich however, this social mentality is woven deep into the workings of the operating system.

Now when you access a particular contact from your phone book you can be greeted with their latest Facebook status updates and Tweets, and also use these social networks to directly make contact (rather than making a phone call or sending an SMS message).

Perhaps the feature that has grabbed the most attention with the Galaxy Nexus and Ice Cream Sandwich is the new lock screen that is on offer. Android already allows you to lock your phone with a password or finger pattern, and the Motorola Atrix even allowed you to use your fingerprint to gain access.

Ice Cream Sandwich offers you the completely new option of using facial recognition software to lock and unlock your device. To unlock the phone you simply take a picture of your face with the front camera, and if it matches you will be granted access. While there was always the possibility of someone stealing your finger to get access to your Atrix there is not much chance of someone getting hold of your face without you knowing.

This handset is a serious candidate for best-in-breed. Google are moving on from the masculine, clinical reputation of Android – and let’s face it, you can’t get further removed from ruthless robots than with an OS named Ice Cream Sandwich. Impressive stuff.

This guest article is contributed by Simon Drew