With the amount of personal information a smartphone contain, security is an important matter. The easiest way to keep your information out of someone else’s hands, in case your phone gets lost or stolen is to put a password on it. On Android one can put a PIN or 3×3 pattern password on the phone. The phone unlocks only when the correct PIN is entered or the right pattern is drawn on the screen.

However, a password protected phone is inconvenient to use since it gets in the way every time you need to use the phone. But like all security measures, it’s a trade-off most people are forced to make because off lack of better alternatives. Hidden Lock offers a great alternative. 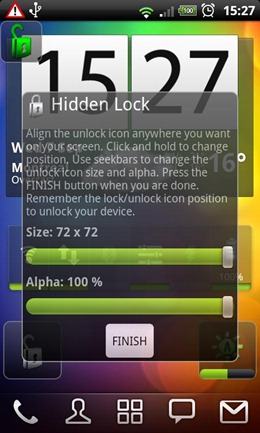 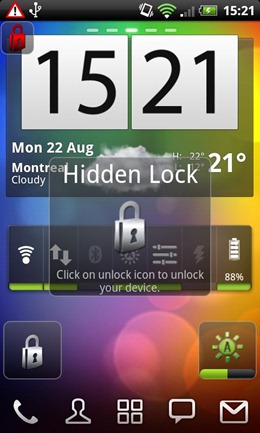 Instead of locking your phone with a PIN or pattern, Hidden Lock allows you to put a simple unlock button anywhere on the screen and then hide it, so that nobody knows where to tap on the screen to unlock it. The phone unlocks only when you tap and hold the screen at the location where you placed the hidden lock.

Upon launching the app, you are asked to place your lock anywhere on the screen by dragging. You can even change the size of the lock, like make it smaller, to be more secure. Once the lock is placed and your device’s screen turns off, you cannot turn it on by sliding the default unlock button. The unlock button remains hidden and does not reveal itself unless you know where to touch and hold your finger. Simply tapping on the unlock button doesn’t work either.

The only way Hidden Lock can fail is if the intruder knows about this app. If the unauthorized person has plenty of time to toy around he can brute force his way by trying out every square centimeter of the screen. The Hidden Lock icon that is visible on the notification bar is also a dead giveaway.

Hidden Lock is a free app. For $1.00 you can get the Pro version which gives you the ability to hide the notification icon and additional customization options.